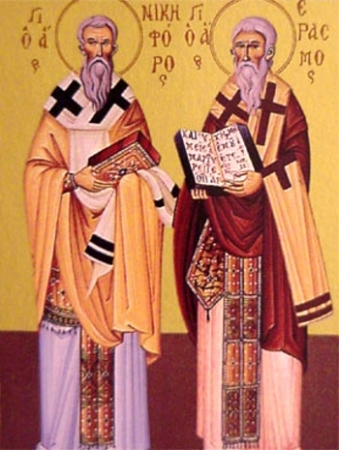 Text from “The Divine Liturgy: An Anthology for Worship”; Pg. 329

Troparion (Tone 1): Though the stone was sealed by the Judeans* and soldiers guarded Your most pure body,* You arose, O Savior, on the third day,* and gave life to the world.* And so the heavenly powers cried out to You, O Giver of Life;* Glory to your resurrection, O Christ!* Glory to Your kingdom!* Glory to Your saving plan,* O only Lover of Mankind.

Kontakion (Tone 1): You arose in glory from the tomb* and with Yourself You raised the world.* All humanity acclaims You as God,* and death has vanished.* Adam exults, O Master,* and Eve, redeemed now from bondage, cries out for joy.* “You are the One, O Christ, Who offer resurrection to all.”

verse: Rejoice in the Lord, O you just; praise befits the righteous (Ps 32:1).

Epistle: (Romans 2:10-16): Brethren, glory and honour and peace for everyone who does good, the Jew first and also the Greek. For God shows no partiality. All who have sinned apart from the law will also perish apart from the law, and all who have sinned under the law will be judged by the law. For it is not the hearers of the law who are righteous in God’s sight, but the doers of the law who will be justified. When Gentiles, who do not possess the law, do instinctively what the law requires, these, though not having the law, are a law to themselves. They show that what the law requires is written on their hearts, to which their own conscience also bears witness; and their conflicting thoughts will accuse or perhaps excuse them on the day when, according to my gospel, God, through Jesus Christ, will judge the secret thoughts of all.

Alleluia (Tone 1): Alleluia, alleluia, alleluia!
verse: God gives me vindication, and has subdued peoples under me (Ps 17:48).
verse: Making great the salvation of the king, and showing mercy to His anointed, David, and to His posterity for ever (Ps 17:51).

Gospel: (Matthew 4:18-23):  At that time, as Jesus walked by the Sea of Galilee, he saw two brothers, Simon, who is called Peter, and Andrew his brother, casting a net into the lake—for they were fishermen. And he said to them, ‘Follow me, and I will make you fish for people.’ Immediately they left their nets and followed him. As he went from there, he saw two other brothers, James son of Zebedee and his brother John, in the boat with their father Zebedee, mending their nets, and he called them. Immediately they left the boat and their father, and followed him. Jesus went throughout Galilee, teaching in their synagogues and proclaiming the good news of the kingdom and curing every disease and every sickness among the people.

Communion Verse: Praise the Lord from the heavens;* praise Him in the highest (Ps 148:1). Alleluia! (3x)