The Holy Glorious All-Praiseworthy and Chief Apostles Peter and Paul; Passing into Eternal Life (1941) of Blessed Iakym (Joachim) (Senkivsky) Basilian Protohegoumen and Martyr of Drohobych  where his body was boiled – June 29

Text from “The Divine Liturgy: An Anthology for Worship”; Pg. 851 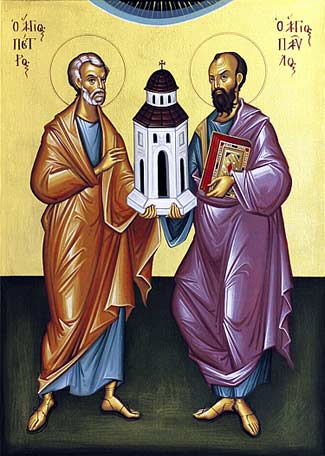 Troparion (Tone 4): As the leaders of the apostles* and teachers of the whole world,* intercede with the Master of all* to grant peace to the world* and to our souls great mercy.

Kontakion (Tone 2): You received Your inspired and steadfast preachers, Your chief disciples,* into the enjoyment of Your good things and into repose.* You, Who alone know the heart, accepted their labours and death* more gladly than any holocaust.

Prokimenon (Tone 8): Their utterance has gone forth into all the earth,* and their words unto the ends of the world (Ps 18:5).

verse: The heavens tell the glory of God, and the firmament declares the world of His hand (Ps 18:2).

Epistle: (2 Corinthians 11:21b -12:9): Brethren, whatever anyone dares to boast of—I am speaking as a fool—I also dare to boast of that. Are they Hebrews? So am I. Are they Israelites? So am I. Are they descendants of Abraham? So am I. Are they ministers of Christ? I am talking like a madman—I am a better one: with far greater labours, far more imprisonments, with countless floggings, and often near death. Five times I have received from the Jews the forty lashes minus one. Three times I was beaten with rods. Once I received a stoning. Three times I was shipwrecked; for a night and a day I was adrift at sea; on frequent journeys, in danger from rivers, danger from bandits, danger from my own people, danger from Gentiles, danger in the city, danger in the wilderness, danger at sea, danger from false brothers and sisters; in toil and hardship, through many a sleepless night, hungry and thirsty, often without food, cold and naked. And, besides other things, I am under daily pressure because of my anxiety for all the churches. Who is weak, and I am not weak? Who is made to stumble, and I am not indignant? If I must boast, I will boast of the things that show my weakness. The God and Father of the Lord Jesus (blessed be he for ever!) knows that I do not lie. In Damascus, the governor under King Aretas set a guard on the city of Damascus in order to seize me, but I was let down in a basket through a window in the wall, and escaped from his hands. It is necessary to boast; nothing is to be gained by it, but I will go on to visions and revelations of the Lord. I know a person in Christ who fourteen years ago was caught up to the third heaven—whether in the body or out of the body I do not know; God knows. And I know that such a person—whether in the body or out of the body I do not know; God knows— was caught up into Paradise and heard things that are not to be told, that no mortal is permitted to repeat. On behalf of such a one I will boast, but on my own behalf I will not boast, except of my weaknesses. But if I wish to boast, I will not be a fool, for I will be speaking the truth. But I refrain from it, so that no one may think better of me than what is seen in me or heard from me, even considering the exceptional character of the revelations. Therefore, to keep me from being too elated, a thorn was given to me in the flesh, a messenger of Satan to torment me, to keep me from being too elated. Three times I appealed to the Lord about this, that it would leave me, but he said to me, ‘My grace is sufficient for you, for power is made perfect in weakness.’ So, I will boast all the more gladly of my weaknesses, so that the power of Christ may dwell in me.

Alleluia (Tone 1):
verse: The heavens shall confess Your wonders, O Lord, and Your truth in the church of the saints (Ps 88:6).
verse: God is glorified in the council of the saints, great and awesome over all those around Him (Ps 88:8).

Gospel: (Matthew 16:13-19):  At that time, when Jesus came into the district of Caesarea Philippi, he asked his disciples, ‘Who do people say that the Son of Man is?’ And they said, ‘Some say John the Baptist, but others Elijah, and still others Jeremiah or one of the prophets.’ He said to them, ‘But who do you say that I am?’ Simon Peter answered, ‘You are the Messiah, the Son of the living God.’ And Jesus answered him, ‘Blessed are you, Simon son of Jonah! For flesh and blood has not revealed this to you, but my Father in heaven. And I tell you, you are Peter, and on this rock I will build my church, and the gates of Hades will not prevail against it. I will give you the keys of the kingdom of heaven, and whatever you bind on earth will be bound in heaven, and whatever you loose on earth will be loosed in heaven.’

Instead of “It is truly…”: O my soul, magnify Peter, the solid rock of Christ’s Church, and Paul, her chosen vessel.

Irmos (Tone 4): You, most glorious Bride and holy Mother of God, in song do we magnify; for the Maker of all things seen and unseen was born of you.

Communion Verse: Their utterance has gone forth into all the earth,* and their words unto the ends of the world (Ps 18:5). Alleluia! (3x)\