Dec 26: Post-feast of the Nativity of Christ; Synaxis of the Most Holy Mother of God 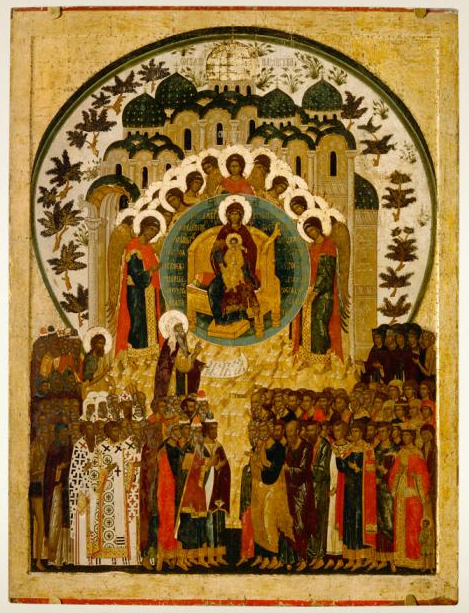 Dec 26: Post-feast of the Nativity of Christ; Synaxis of the Most Holy Mother of God

Text from “The Divine Liturgy: An Anthology for Worship”; Pg. 762

Refrain: Through the prayers of the Mother of God, O Saviour, save us.

Verse 2: In the council of the just and the congregation,* great are the works of the Lord, conforming to His will in every way (Ps 110:1-2).

Refrain: Through the prayers of the Mother of God O Saviour, save us.

Verse 3: His work is filled with praise and majesty,* and His righteousness endures forever (Ps 110:3).

Refrain: Through the prayers of the Mother of God O Saviour, save us.

If the second antiphon is sung: (Refrain: Through the prayers of the Mother of God O Saviour, save us.) Otherwise we sing: Only-begotten Son…

We sing the usual Third Antiphon, but with the festal refrain: Son of God, born of a virgin, save us who sing to You: Alleluia.

Troparion (Tone 4): Your Nativity, O Christ our God,* made the light of knowledge dawn on the world;* through it, those who worshipped the stars were taught by a star* to worship You, the Sun of Righteousness,* and to know You, the Dawn from on high.* Glory to You, O Lord.

Kontakion (Tone 6): He Who existed before the morning star* and was born of the Father without a mother,* today, O Full of Grace, becomes flesh from you without a father.* Wherefore, a star brings the news to the Magi* and angels with shepherds sing of how you gave birth ineffably.

verse: Because He has regarded the humility of His handmaid; for behold, from henceforth all generations shall call me blessed (Lk 1:48).

Epistle: (Hebrews 2:11-18): Brethren, he who sanctifies and those who are sanctified all have one Father. For this reason Jesus is not ashamed to call them brothers and sisters, saying, ‘I will proclaim your name to my brothers and sisters, in the midst of the congregation I will praise you.’  And again, ‘I will put my trust in him.’ And again, ‘Here am I and the children whom God has given me.’ Since, therefore, the children share flesh and blood, he himself likewise shared the same things, so that through death he might destroy the one who has the power of death, that is, the devil, and free those who all their lives were held in slavery by the fear of death. For it is clear that he did not come to help angels, but the descendants of Abraham. Therefore he had to become like his brothers and sisters in every respect, so that he might be a merciful and faithful high priest in the service of God, to make a sacrifice of atonement for the sins of the people. Because he himself was tested by what he suffered, he is able to help those who are being tested.

Instead of “It is truly…”: O my soul, magnify the all-pure Virgin Mother of God, more honourable and glorious than the heavenly hosts

Irmos (Tone 1): To keep silence in fear would be easier for us to do, for this is free from danger, O Virgin Mother, and though it is hard indeed to properly weave hymns, O Mother, give us strength so that our good intention may be fulfilled.

Communion Verse: The Lord has sent deliverance* to His people (Ps 110:9) Alleluia! (3x)