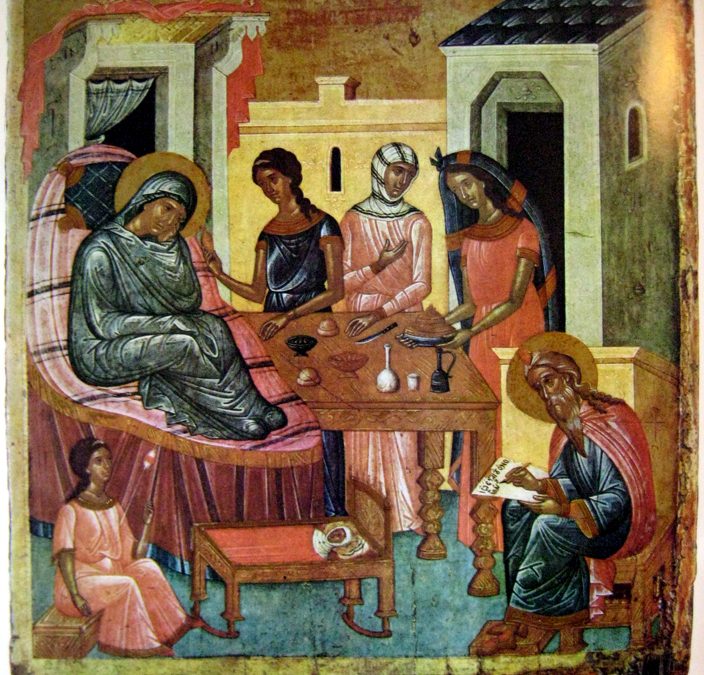 Kathisma
“Blessed is the man…” is sung.

Today the Voice of the Word frees his father’s voice
which was lost through disbelief,
and he reveals the blessed posterity of the Church
by loosing his mother’s bond of barrenness.
The Lamp preceding the Light appears;
the star proclaims the coming of the Sun of Justice
who is the restoration of all
and the salvation of our souls.

When the time approached for the Word of God to be born from a Virgin,
a messenger came forth from a barren womb.
He is the greatest born of woman
and the greatest of the prophets.
Behold, the beginnings of God’s actions are beyond our understanding.
You were begotten eternally and conceived without seed;
you work wonders for our salvation. Glory to you!

Today the great Forerunner appears,
born from the barren womb of Elizabeth.
He is a prophet greater than all prophets;
there is no other like him, nor has there ever been.
For the most wondrous Light followed the lamp of the Forerunner;
the Word followed the Voice,
and the Bridegroom followed the bridegroom’s friend.
He prepares a special people for the Lord,
cleansing them with water until the coming of the Spirit.
He is the offspring of Zechariah and the noble dweller of the desert,
the preacher of repentance, and the purification of sins.
He announced the good news
of the Resurrection from the dead to those in Hades,
and he prays for our souls.

O John, the Baptizer of Christ,
you manifested yourself to be a prophet and forerunner
from the time you were in the womb.
When you saw the queen coming to her servant,
you leaped for joy in the womb of your mother,
you, the one conceived of a barren woman,
according to the promise made to the elder Zechariah.
You knew she was bearing the eternal One
who was from the Father without a mother.
Now implore God to have mercy on our souls.

Zechariah did not believe the word of the angel
who told that Elizabeth would conceive and bear a son.
Instead he replied: How can she give birth,
for we are both advanced in years.
He was made silent by your decree because of his disbelief.
Today he sees the promised birth,
and his silence is ended to give way to joy.
O, what a glorious marvel!
He shouts aloud: Blessed is the Lord, the God of Israel,
for He has turned to his people and brought them salvation.
He grants great mercy to the world.

O most praiseworthy John and universal apostle,
good news of Gabriel and flower of the barren woman,
noble child of the desert,
true friend of the bridegroom Christ,
pray to Him to have mercy on our souls.

Today, like a shining star,
the Lamp prepares the way for the coming of the Word of God.
Today Zechariah speaks clearly, ending the silence imposed by the angel,
for it was not right that the father of the Voice be kept silent
once John was born from a barren womb.
He comes to announce with great boldness
the good news of salvation for all the world.

Elizabeth carried the Forerunner of grace,
and the Virgin carried the Lord of glory.
When the mothers greeted each other, the infant leaped for joy,
for even within the womb, the servant praised the Master.
The mother of the Forerunner was amazed and sang out:
How have I deserved that the mother of my Lord has come to me?
Glory to Him who with great mercy saves a despairing people.

O mountains, give forth your sweetness;
O hills, skip about like lambs;
for today the Lord’s forerunner, desiring to abide with us, is born of Elizabeth.
At his birth he loosed his father’s silence.
Therefore, let us cry out to him:
O Baptizer of Christ, implore Him to save our souls.

The God-named Voice and Lamp of the Light, the Forerunner of the Lord,
was attested to by Christ as the foremost of the prophets.
Please remember your flock in order to preserve it intact,
and we also ask that you pray for the world.

O prophet and forerunner John,
you were the preacher of the Lamb who is the Word of God.
You prophesied the future;
you spoke beforehand to the ends of the earth:
Behold the Lamb of God who takes away the sins of the world
and grants great mercy to all.

Today Elizabeth rejoices as she gives birth
to the end of the prophets and the beginning of the apostles,
the earthly angel and the heavenly man,
the voice of the Word, the soldier and forerunner of Christ,
who leaped for joy beforehand because of the Promised One
and who preached before the birth of the Sun of Justice.
In his old age Zechariah is amazed,
having cast aside the muteness imposed as a punishment.
As the father of the Voice, he prophesies most splendidly:
And you, O child, shall be called the prophet of the Most High,
and you shall go before Him to prepare the way.
Therefore, O angel, prophet, apostle, and soldier,
forerunner, baptizer, preacher of penance, and guide,
as the voice of the light of the Word,
pray unceasingly for us who faithfully keep your memory.

O most pure Virgin ,
you are the temple, the gate, the palace, and the throne of the King.
Christ, our Redeemer and Lord,
appeared through you to those who slumbered in darkness.
For He, as the Sun of Righteousness,
wished to enlighten those whom He created with his own hands
according to his own image.
Therefore, O Lady, whom we always praise in song,
we beseech you to intercede with Christ for the salvation of our souls;
for, as his mother, you can approach Him with the greatest of confidence.

With psalms and hymns and spiritual songs
let us praise the glorious desert-dweller John,
since he is the prophet of prophets
and the fruit of a barren womb,
greater than all born of women.
Let us cry out to him:
O Baptist and Forerunner of the Saviour,
by your holy birth you may implore Christ with confidence
to grant peace to the world
and great mercy to our souls.

Blessed be the Lord, the God of Israel, because He has visited and ransomed his people.

According to the promise,
John the Forerunner and the Voice of the grace of the Word has appeared.
He was born today of the childless, barren woman.
Rejoice, O people,
for he has come to prepare for us the way of the Saviour
to whom he bowed down and leaped for joy
while still in the womb of his mother.
He is the Lamb who takes away the sins of the world
and grants great mercy to us.

And you, O child, shall be called prophet of the Most High.

John, who was sanctified in the womb of his mother
and received the fullness of prophecy,
is born today from a barren woman.
Clearly he announces the coming of the Lord:
Repent, for the kingdom of heaven is at hand.

Today the voice of the prophet Isaiah is fulfilled
in the birth of the greatest of the prophets, John.
He had said: Behold, I will prepare the way of the Lord.
He will be a soldier of the kingdom of heaven,
running before the path of our God.
By nature he was a man,
yet in the present life he became an angel,
for he welcomed moderation in complete purity.
He had a human nature but fled what was according to nature
and struggled beyond the natural.
Therefore, let all the faithful imitate his virtues
and beg him to pray for the salvation of our souls.

Elizabeth said to the Virgin Mary:
How is it that the Mother of my God has come to me?
You bear the King, and I, a soldier.
You bear the Lawgiver, and I, a preacher of the law.
You bear the Word, and I, the voice who announces the kingdom of heaven.

In Tone 4
O Prophet and Forerunner of the coming of Christ,* in spite of our honoru and devotion,* we are unable to give you worthy praise.* Through your glorious and noble birth* your mother’s childlessness was ended,* your father’s tongue was freed,* and the Incarnation of the Son of God** was proclaimed to the world. 2x

In Tone 1
Rejoice, Virgin Mary, Mother of God, full of grace,* The Lord is with you.* Blessed are you among women, and blessed is the fruit of your womb.* For you have borne Christ,* the Saviour and Deliverer of our souls.

Troparia and Kontakia
Troparion, Tone 4: O Prophet and forerunner of the coming of Christ,* we, who lovingly honour you are at a loss to praise you worthily;* for your mother’s barrenness and your father’s silence* were both ended by your honoured and glorious birth,* and the incarnation of the Son of God* is preached to the whole world.

Glory be to the Father and to the Son and to the Holy Spirit, now and for ever and ever. Amen.

Kontakion, Tone 3: She who once was barren gives birth today to the Forerunner of Christ,* who will fulfil every prophecy.* In the Jordan he placed his hand upon the One Whom the prophets foretold* and thus was shown to be the prophet, the herald,* and the Forerunner of the Word of God.

Prokeimenon, Tone 7
The just man shall be glad in the Lord and shall hope in Him.
verse: Hear, O God, my voice when I make my petition to You. (Psalm 63:11,2)

Alleluia, Tone 1
verse: Blessed be the Lord God of Israel, for He has visited His people and redeemed them.
verse: And you, O child, will be called the prophet of the Most High (Luke 1:68,72)

Hymn to the Mother of God
O my soul, magnify the precious birth of Christ’s Baptist and forerunner, John.
Words cannot express the hidden, divine, ineffable mystery* that is clearly fulfilled in you, Virgin immaculate,* for because of His loving mercy God became flesh of you.* And, therefore, as Mother of God, we magnify you.

Communion Hymn
The just man shall be in everlasting remembrance;* of evil hearsay he shall have no fear.* Alleluia, alleluia,* alleluia. (Psalm 111:6)