Who could have guessed that a child born February 17, 1892, into a humble, deeply religious family in Western Ukraine would become a prince of the Ukrainian Catholic Church, leading his flock into the 20th century? Such was God’s plan for this child and from an early age, his faith pulled him into service for his long-suffering Ukrainian Catholic faithful. This child’s fate was predetermined, and God’s will led and empowered him throughout his extraordinary, exemplary yet challenging life.

The year 2022 marks the 130th anniversary of the birth of one of the giants of the Ukrainian Catholic Church, Patriarch Josyf Slipyj, whose profound faith nourished him as God’s will thrust him into one of the most tragic and tumultuous periods our Church has known. He was born in the village of Zazdrist, Terebovlia County, Ternopil Oblast, Western Ukraine. Unlike many priests of the time, he did not come from a priestly family, his father was a farmer. He completed his secondary studies in Ternopil and aspired to be a university professor while also answering God’s call to the priesthood. Slipyj began his theological studies at the Greek Catholic Theological Seminary in L’viv (forerunner of today’s Ukrainian Catholic University) and the L’viv University in 1911-1912. Metropolitan Andrey Sheptytsky ordained him in October 1917. Slipyj was concerned his studies would interfere with his pastoral work, however, with guidance from Metropolitan Andrey, Slipyj continued his studies at the Jesuit theological faculty in Innsbruck earning a Doctorate of Theology in 1918 defending his habilitation (similar to a dissertation) at Innsbruck University in 1920. His dissertation was written in German. He completed further studies at the Pontifical Gregorian University in Rome, where he defended a second habilitation written in Latin, in 1924. Slipyj’s gift for teaching led him to teach at the L’viv Greek-Catholic Major Seminary and to establish and edit multiple scholarly publications. In 1925, he was appointed rector of the Major Seminary, a position he held until 1944. In 1928, Slipyj was appointed the first Rector of the Greek Catholic Theological Academy. This Academy became the most important centre of Ukrainian Catholic study and training, publishing scholarly works, establishing a museum collection of icons and church objects, and training priests and theologians for the Ukrainian Church. Throughout this time, Josyf Slipyj researched and wrote extensively on religious law, philosophical, historical, and literary subjects.

By the end of the 1930’s, Metropolitan Andrey Sheptytsky was preparing for a time when he would need a successor. With the approval of Pope Pius XII, Reverend Josyf Slipyj was ordained archbishop with the right of succession. The ordination was conducted in secret due to the uncertain conditions in Soviet dominated Ukraine. Slipyj accepted this duty with the same steadfast commitment he demonstrated in his academic work and governance of the Seminary. 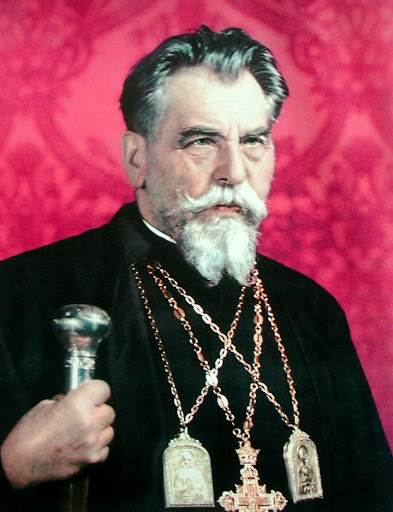 World War II was raging, and Ukraine was savaged. Between 1939 and 1944, Josyf Slipyj continued educating clergy at the L’viv Theological Seminary and working to protect the Ukrainian Catholic Church. Slipyj assumed the rights of the Metropolitan upon Sheptytsky’s death on November 1, 1944. The Russian communist occupiers did not dare openly persecute Metropolitan Andrey, as they feared him, however, almost immediately after his passing the brutal, systematic liquidation of the Ukrainian Catholic Church began. The new Metropolitan Josyf led his Church and supported his people who were traumatized by the Nazi’s and the communists and faced unspeakable losses and moral devastation.

Within months, Slipyj along with the entire Ukrainian Catholic hierarchy and thousands of priests, monks, sisters, and faithful, were arrested by the NKVD (predecessor of the KGB) and jailed, sent to concentration camps in Siberia or simply murdered. Slipyj was arrested on April 11, 1946, jailed in the notorious Lonsky Street prison in L’viv and sentenced by a secret military tribunal to 8 years of penal servitude in a concentration camp for alleged treason. In actuality, Slipyj’s incarceration resulted from his refusal to sever ties with the Holy See and submit the Ukrainian Catholic Church to the authority of the Moscow Patriarchate that was (and continues to this day to be) a tool of the Kremlin. Slipyj disappeared into the vast Soviet gulag. This was the beginning of 18 years of physical and mental torture, hard labour, imprisonment, starvation, and illness, all the while forbidden virtually all contact with his family and shunted between prisons and concentration camps in Siberia and Russia. While imprisoned he continued his writings and ministering to his fellow prisoners of all faiths. During these years, the Ukrainian Catholic Church was illegal and existed only underground. It was known as the Church of the Catacombs. It was not until Stalin’s death in 1953 that news about the fate of this saintly man began to slowly emerge.

In February 1963, Metropolitan Slipyj was released from exile and expelled from the Soviet Union. This miraculous event resulted from interventions by Pope John XXIII, President John F. Kennedy, and American journalist Norman Cousins. Before his departure, Slipyj asked to see his relatives in Moscow. Posing as a relative, Fr. Vasyl Velychkovsky, superior of the Redemptorists and head of the Ternopil Monastery met Slipyj who ordained him in secret as Bishop of Lutsk and appointed him locum tenens or “acting head” in Ukraine. Thus began a new era of growth and struggle for the Ukrainian Catholic Church.

Almost at once upon his arrival in Rome, Metropolitan Slipyj threw himself into restoring his Church and ministering to his flock, rebuilding unity amongst the faithful. In his first Easter address in freedom in 1963, he called upon his brethren “through all means to stay united. Though we are all scattered around the world, we are still united in the Holy Eucharist and our paschal faith, which is expressed by the words Christ has risen!” Metropolitan Slipyj reached out to all Catholics when he attended the Second Vatican Council. With his unshakeable faith, he addressed over 2500 delegates from around the world urging that the Ukrainian Catholic Church be raised to the honour of a patriarchate and received support of the participating bishops. Metropolitan Slipyj brought the long-suffering Ukrainian Catholic Church to the forefront of the global Catholic family.

Between 1968-1973 Cardinal Slipyj embarked on a journey to visit and provide spiritual nourishment to Ukrainian faithful scattered around the globe. His visits invigorated and enlivened Ukrainian Catholics in hundreds of parishes he visited in fourteen countries. His visits left an indelible mark on all who met him. In a matter of years, he successfully reversed at least some of the devastation caused the Ukrainian Church and Nation by the Russian communists.

Unfortunately, his efforts were not without challenges. In 1969, 19 out of 21 Ukrainian Catholic Bishops asked Pope Paul VI to confer the title of Patriarch upon Cardinal Slipyj. The Pope refused, fearing this would upset the Kremlin and potentially affect his own plan of supporting Catholic communities in the Warsaw Pact countries, referred to as the Vatican’s Ostpolitik. Ultimately, Ostpolitik was a dismal failure.

Cardinal Slipyj was undeterred, his energy seemed boundless. He redoubled his efforts to revitalize, unite and rebuild his Church. He continued to advocate for the Ukrainian Church in the Catacombs and ensured that information about the repressions, sufferings, and unspeakable casualties of the Ukrainian Catholics were acknowledged. The faithful of his Church recognized the importance of the Cardinal’s message and from a broad grass roots level recognized him as Patriarch of the Ukrainian Catholic Church.

By 1980, Patriarch Josyf’s health was failing, and a successor was needed. Pope John Paul II convoked a Synod of the Ukrainian Catholic Bishops that elected Myroslav Ivan Lubachivsky, Metropolitan of Philadelphia, as Slipyj’s coadjutor with the right of succession. In anticipation of his passing, Patriarch Josyf wrote his Testament in which he envisioned the future of his Church and spoke directly to his faithful with powerful words of encouragement and direction for the coming days. On September 7, 1984, Patriarch Josyf fell asleep in the Lord. His earthly remains were returned to Ukraine in 1992 and buried in the crypt of St. George’s Cathedral in L’viv.
During his 21 years in Rome, Patriarch Josyf accomplished a lifetime’s worth of work and left a unique legacy to the Ukrainian Church for generations to come. He was a scholar, a teacher, a pastor, and an uncompromising nation builder. His faith in God and the Ukrainian Nation were unshakeable.

We take the term patriarch for granted and assume the head of our Church has always been ‘the Patriarch.”  However, in fact, this was a hard-fought designation that is tantamount to the recognition of the Ukrainian Nation, of Ukraine and the Ukrainian Church in the family of Catholic Churches. Patriarch Josyf exemplified unwavering faith, commitment to God’s teachings and a deep love for his people. Much more than a leader of Ukrainian Catholics, he is the symbol of resistance against those who sought to destroy the Ukrainian Catholic Church and the Ukrainian Nation. He successfully resisted the totalitarian regime that could not destroy him or his faithful. His strength of spirit disarmed his enemies and inspired his faithful. In this 130th anniversary year, let us pay tribute to Patriarch Josyf and remember his incredible achievements and his loving bequest to us all.