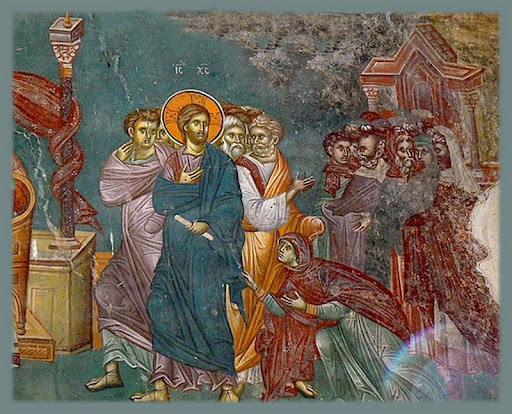 “Blessed is the man…” is sung.

Come, let us rejoice in the Lord,* who destroyed the power of death* and enlightened the human race;* and let us cry out with the angels:* Glory to You, our Creator and Saviour!

O Saviour, for our sake You suffered crucifixion and burial;* and, as God, You destroyed death by Your death.* Therefore, we adore Your resurrection on the third day* and we sing: Glory to You, O Lord!

On seeing the resurrection of the Creator,* the apostles were amazed,* and they sang an angelic hymn of praise:* This is the glory of the Church,* this is the richness of the Kingdom!* O Lord, who suffered for our sake, glory to You!

O Christ, although You were taken captive by Your enemies,* I still acknowledge You as my God,* and am not ashamed of You;* I will not hide the fact that You were nailed to the Cross.* Your death is my life, almighty Lord,* and I extol Your resurrection.* O Lover of mankind, glory to You!

You were fittingly revealed* as a divinely assembled regiment, greatly glorious ones:* a sacred army, a godly company, a holy nation;* a legion of martyrs inspired by God,* a noble gathering and unbreakable alliance,* inhabitants of the city on high!* Therefore you are rightly called blessed!

Let us all assemble and honour Nicander,* with Hesychius, Athanasius and Mamas,* the divine Barachius and Callinicus, Theogenes and Nicon,* Longinus and Theodore, Valerius and Xanthius,* Theodulus, Callimachus and Eugene,* the godly Theodochus and Ostrychius!

Let us together hymn the true witnesses with faith:* the valiant Hieron, the glorious Epiphanius, Maximian and Ducitius, Claudian and Theophilus* and the godly Gigantius, Dorotheus and Theodotus,* Castrycius, Anicetas and Themelius,* and also Eutychius!

Having set aside all the folly of the passions* and made your flesh subject to your spirit,* you became a rule of virtue, the confirmation of monastics,* a model for those who fast, the adornment of the venerable ones!* Now you behold the ineffable beauty of your Creator* and are ever nurtured by the Spirit on the beauties of heaven!* Therefore we have assembled to celebrate with hymns and sweet songs* your honoured and most festive memory!

You cut off all the heavy burden of material things* and the great turmoil of the flesh.* Wise one, controlling even your breath,* you remained untouched by the passions,* your courageous mind strong as a pillar surrounded by spiritual armor!* Now you have truly received the divine vision and splendour* and have taken your place before Him whom you desired,* where made divine by your manner,* you delight in His never-ending radiance!

You loved the Light, like Elijah and John the Forerunner.* You observed stillness in the mountains and arid deserts,* ever learning to ascend towards God and excelling in the virtues.* Therefore you have gained your ultimate desire, all-wise one,* and you stand rejoicing before the triply-radiant light of the Trinity* from whom you received divine splendour!* Intercede with boldness on behalf of our souls!

Venerable father, you did not give sleep to your eyes nor slumber to your eyelids,* until you freed your soul and body from the passions,* preparing yourself to be a dwelling-place of the Spirit!* Christ, coming with the Father, made His dwelling in you!* Since you are a favourite of the consubstantial Trinity,* great preacher, Lazarus our father,* ever pray on behalf of our souls!

Immaculate Mother of God,* you became a mother outside the laws of nature,* remaining a virgin in a way that exceeds all description* and human understanding.* The wonder of your birth-giving could not be told in human language,* for your conception of Christ blinded intelligence,* and your birth-giving exceeded understanding:* for whenever God so desires, the laws of nature are broken.* Wherefore, we all firmly believe that you are the Mother of God,* and we eagerly beseech you to intercede for the salvation of our souls.

O Saviour of the world, You arose from the grave,* and together with Your own flesh You raised up mankind.* O Lord, glory to You!

Come, let us worship Christ who arose from the dead* and enlightened all creation.* For by His resurrection on the third day,* He set us free from the oppression of Hades,* granting us life and His great mercy.

O Christ, Lover of mankind,* You descended into Hades and destroyed death.* Then You arose on the third day;* and, together with Yourself You lifted up all of us* who glorify Your mighty resurrection.

O Lord, what a fearful sight it was to see You lying in the tomb as if asleep.* Yet on the third day You arose in great power,* and at the same time You raised up Adam who joyfully cried out:* Glory to Your resurrection, O Lover of mankind!

The sound of your teachings has gone out into all the earth, venerable father Lazarus!* Therefore you have found the reward of your labours in the heavens.* You destroyed the hosts of demons* and reached the ranks of angels whose life you blamelessly followed!* Since you have boldness before Christ our God,* entreat peace for our souls!

Christ the Lord, our Creator and Redeemer,* came forth from your womb, O most pure Virgin.* He clothed Himself in our human flesh* to set us free from the original curse of Adam.* Therefore, O Mary, we praise you, without ceasing,* as the true Virgin Mother of God,* and we sing with the angels:* Rejoice, O Lady, advocate, protector, and salvation of our souls.

By Your cross You destroyed death;* You opened Paradise to the thief;* You changed the lamentation of the myrrh-bearers to joy,* and charged the apostles to proclaim* that You are risen, O Christ our God,* offering great mercy to the world.

Your holy martyrs, O Lord, through their sufferings* have received their incorruptible crowns from You, our God!* For having Your strength, they laid low their adversaries,* and shattered the powerless boldness of demons.* Through their intercessions, save our souls!

O Mother of God, the mystery hidden from all eternity* and unknown even to the angels,* was revealed through you to those on earth:* God took on our human nature* and united it to His divine nature in a perfect but unconfused union.* Then, He willingly accepted the cross for our sake* and thereby raised again the first created man,*and saved our souls from death.

Troparion, Tone 7: By Your cross You destroyed death;* You opened Paradise to the thief;* You changed the lamentation of the myrrh-bearers to joy,* and charged the apostles to proclaim* that You are risen, O Christ our God,* offering great mercy to the world.

Kontakion, Tone 7: No longer shall the dominion of death be able to hold humanity,* for Christ went down shattering and destroying it s powers.* Hades is bound.* The prophets exult with one voice.* The Saviour has come for those with faith, saying:* “Come forth, O faithful, to the resurrection!”

Theotokion, Tone 7: O all-praised treasury of our resurrection, we hope in you,* bring us up from the pit and depth of sin,* for you have saved those subject to sin* by giving birth to our Salvation,* O Virgin before childbirth, and Virgin in childbirth,* and still a Virgin after childbirth.

Epistle: Ephesians 2:14-22 (NRSV)
Brothers and Sisters, for he is our peace; in his flesh he has made both groups into one and has broken down the dividing wall, that is, the hostility between us. He has abolished the law with its commandments and ordinances, that he might create in himself one new humanity in place of the two, thus making peace, and might reconcile both groups to God in one body through the cross, thus putting to death that hostility through it. So he came and proclaimed peace to you who were far off and peace to those who were near; for through him both of us have access in one Spirit to the Father. So then you are no longer strangers and aliens, but you are citizens with the saints and also members of the household of God, built upon the foundation of the apostles and prophets, with Christ Jesus himself as the cornerstone. In him the whole structure is joined together and grows into a holy temple in the Lord; in whom you also are built together spiritually into a dwelling place for God.

Alleluia, Tone 7
verse: It is good to give praise to the Lord; and to sing to Your name, O Most High.
verse: To announce Your mercy in the morning, and Your truth every night. (Psalm 91:2,3)

Gospel: Luke 8:41-56 (NRSV)
At that time, there came a man named Jairus, a leader of the synagogue. He fell at Jesus’ feet and begged him to come to his house, for he had an only daughter, about twelve years old, who was dying. As he went, the crowds pressed in on him. Now there was a woman who had been suffering from hemorrhages for twelve years; and though she had spent all she had on physicians, no one could cure her. She came up behind him and touched the fringe of his clothes, and immediately her hemorrhage stopped. Then Jesus asked, “Who touched me?” When all denied it, Peter said, “Master, the crowds surround you and press in on you.” But Jesus said, “Someone touched me; for I noticed that power had gone out from me.” When the woman saw that she could not remain hidden, she came trembling; and falling down before him, she declared in the presence of all the people why she had touched him, and how she had been immediately healed. He said to her, “Daughter, your faith has made you well; go in peace.”

While he was still speaking, someone came from the leader’s house to say, “Your daughter is dead; do not trouble the teacher any longer.” When Jesus heard this, he replied, “Do not fear. Only believe, and she will be saved.” When he came to the house, he did not allow anyone to enter with him, except Peter, John, and James, and the child’s father and mother. They were all weeping and wailing for her; but he said, “Do not weep; for she is not dead but sleeping.” And they laughed at him, knowing that she was dead. But he took her by the hand and called out, “Child, get up!” Her spirit returned, and she got up at once. Then he directed them to give her something to eat. Her parents were astounded; but he ordered them to tell no one what had happened.

Communion Hymn
Praise the Lord from the heavens;* praise Him in the highest.* Alleluia, alleluia,* alleluia. (Psalm 148:1)