In this icon we are presented with the Palm (Flowery) Sunday scene as Jesus makes his way into Jerusalem. To the left is the mount of Olives and behind Him follow the disciples. To the right, is the city of Jerusalem and the crowd who awaits with branches. The prominent palm tree in the middle of the icon is a foreshadowing of the cross upon which Christ will claim His victory over death. We see the cloaks which as we read in Scripture were thrown before him as the crowd greeted Him with shouts of “Hosanna!”

Jesus looks back at his disciples, as if to say “Will you follow where I am going?” while He holds his right hand toward the crowd in blessing. He is forever the high priest. His blessing hand forms the four-letter Christogram IC XC, as it is by the name of Jesus that humanity is saved and receives blessings. He holds a scroll in his left hand indicating that He is the fulfillment of the Old Testament prophecies.  A scroll in the hand also tells the reader that the one holding it is a person of authority and wisdom.

Jesus rides on a donkey as opposed to a horse. This was foretold by the prophet Zechariah 9:9. This is significant. A king riding upon a donkey would be taken to mean that he was coming in peace.  A king on a horse showed that he was bringing war. Today the eternal King of Peace approaches. Also, significantly, at the time, a donkey would have been associated more with the Gentiles than with the Jews. This would have been a surprise to the crowd, but for us we are reminded that He is the King for Jews and Gentiles alike.

Although we do not see them in this particular icon, children are often depicted cutting and waiving branches or throwing coats in front of Christ. See the example to the right. This is a reference to Psalm 8:2 Out of the mouths of babes and infants you have founded a bulwark because of your foes, to silence the enemy and the avenger. Because they are pure of heart, the children recognize who it is that comes, representing all those who throughout the ages come to accept Jesus as the Saviour because they too are pure of heart. 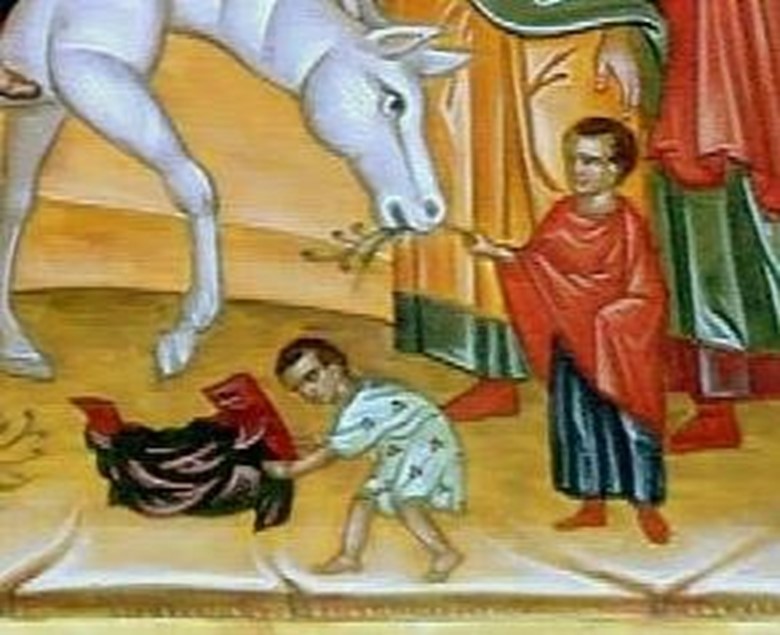 This is reflected in the Troparion for Palm Sunday: “and so, like the children we also carry signs of victory and cry to You, the conqueror of death: Hosanna in the highest!”

Up to this point, we have spent the time of the Great Fast preparing ourselves by prayer, fasting and almsgiving so that we may be truly pure of heart and so that like the children we may welcome Christ to make His home in us. Let us pray that we can continue this work all through the year and continually shout:

Hosanna in the Highest!

Compiled & created by the Religious Education Department of the Ukrainian Catholic Eparchy of Edmonton: http://eeparchy.com/ Permission granted to reproduce for personal and classroom use. 2021.