At the center of the icon, Jesus Christ is standing victoriously dressed in a shining tunic which is floating upwards depicting his rapid descent into Hades to save those who have died in the flesh. The usual colour of the tunic is gold, or white with gold highlights. The golden band over his right shoulder is called a clavus – a symbol of Roman imperial dignity worn by senators who, along with the emperor, were the only ones sanctioned to speak in the imperial court. This indicates the authority of Christ, the Word of God, to proclaim the good news of salvation to those in Hades. The three Greek letters in the halo of Christ also reveal him as God (‘o ōn – the one who is). In Exodus 3:13-14 when Moses encounters God in the burning bush and asks his name, God replies “I AM WHO AM” (Yahweh in Hebrew and ‘o ōn in Greek)

The Mandorla or nimbus, the tri-colour blue concentric almond shapes surrounding Christ, represent the divine glory and majesty of God beyond that which can be physically witnessed. The mandorla testifies to the fact that it is the invisible trinitarian God who takes the initiative, and through Christ approaches us, reaching out and extending the divine presence even to the depths of Hades. We, in turn, draw closer to God the more deeply we move into the mystery depicted in the icon.

The two mountains at the sides remind us that Christ brings salvation not only to humanity, but to all of creation. The figures around Jesus vary from icon to icon but are generally Old Testament prophets and saints. Moses, King David, King Solomon, and John the Baptist are almost always depicted. Jesus grasps Adam and Eve by their arms pulling them out of the tomb of death. They represent all of humanity being saved from sin and death.

Beneath Christ’s feet lie the gates of Hades, smashed wide open, lying in the shape of a cross, proclaiming that by his death on the cross, Christ has trampled death. The nails and iron bars below his feet represent the hardware which had held the gates fastened, now never more to shut us in. The keys, locks, and chains floating in the abyss signify the restraints by which we had been imprisoned by sin and death. Sometimes there is an emaciated figure who is chained up in the darkness:  this is Death (Hades personified) and/or Satan who, in turn, has been bound and whose power has been destroyed by Christ. 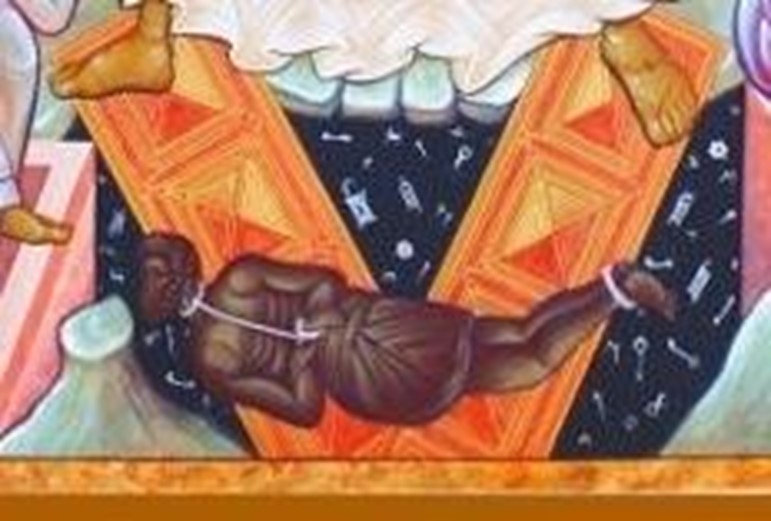 For this reason, throughout Pascha we sing “Christ has trampled death by death.” The icon illustrates the declaration of Hebrews 2:14 “that through death he might destroy him who has the power of death, that is, the devil.”  This has been accomplished through the life-giving death of our Saviour, giving us cause to shout:

Christ is Risen! Truly He is Risen!

Compiled & created by the Religious Education Department of the Ukrainian Catholic Eparchy of Edmonton: http://eeparchy.com/ Permission granted to reproduce for personal and classroom use 2021.