Explanation of the Icon of the Nativity of our Lord

In this icon our eye is drawn first to the Mother of God; the Theotokos. She is the largest figure indicating her importance in the event of the incarnation of our Lord.  It was her humble and total “yes” to God that allowed for the salvation of humanity.  She is the new Eve. The first Eve was the mother of all fallen humankind.  The Theotokos is the mother of all redeemed humankind.

Our eye is drawn next to the colour black behind Jesus.  Black is rarely seen in icons, therefore when we see it, it has great significance. Jesus is the light born into the darkness of the world caused by sin. He has come to conquer the darkness of sin and death and is ultimately victorious over the power of evil.

This cave also reminds us of the sacrifice that Jesus will offer.  It resembles His tomb in which He will be laid after His crucifixion. But like this cave, His tomb will be one that brings life, not death. The baby is wrapped in strips of cloth reminiscent of the cloths that will wrap Him at his death. The crib itself appears as a coffin. All of this foreshadows His death and reminds us that He was born to die.

The shaft of light from a segment of a circle; the vault of Heaven, comes down upon the Child.  At the point of the star (symbolizing the star of Bethlehem) the shaft of light breaks into three shafts signifying the Trinity.

Note the ox and donkey looking directly at the child recognizing Him as the Messiah, whereas we know from the Gospels, this will not be the case of many in Israel. We read in the prophesy of Isaiah 1:3 “The ox knows its owner and the donkey its master’s crib; but Israel does not know, my people do not understand.”

The angel appears to the lowly shepherds who are the first to hear the good news and to share it.  This is a moment of unity between heaven and earth. The angels depict a

“bursting in” of heaven to earth. In essence they are the bridge between the two. All creation both visible and invisible, is filled with rejoicing today!

In the bottom left corner St. Joseph sits in distress and confusion. The old man speaking to him is the great tempter, coming to increase his doubts about the miracle of Christ’s birth.

Ultimately, of course, St. Joseph does not give in to this temptation. Many icons of the Nativity such as the one to the left show a tree near him. This is the tree of Jesse showing Jesus’ noble ancestry. It refers to Isaiah 11:1 “A shoot shall come out from the stump of Jesse, and a branch shall grow out of his roots.” 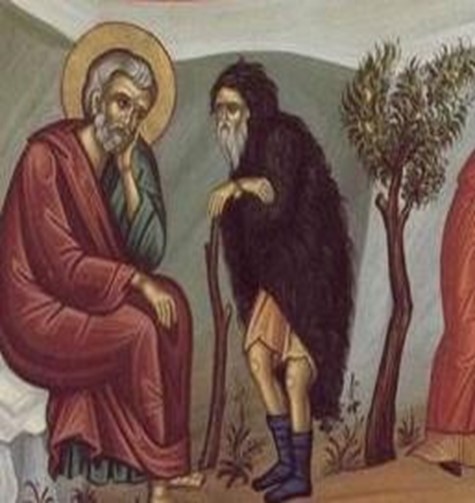 On the bottom right there are two midwives pictured washing the baby Jesus. We read in the Protoevangelium of James Chapters 17-25 that when a midwife realized that Mary was a virgin she exclaimed: “My soul is magnified this day, because mine eyes have seen marvellous things: for salvation is born unto Israel.” A second midwife doubts until she has examined Mary for herself. This detail of the midwives also reinforces for us that although Christ remains divine, in the incarnation, He is also truly human.  Just like any other baby He needs to be washed after birth.

The joy of the colours, the participation of all creation, and the flurry of activity remind us of the enormous significance of the event of the incarnation; in this icon we sense the pure joy of humanity working together with the God of all creation to bring about the salvation of the world!

Compiled & created by the Religious Education Department of the Ukrainian Catholic Eparchy of Edmonton:

http://eeparchy.com/ Permission granted to reproduce for personal and classroom use. 2020.

On December 17 2020, the Edmonton Eparchy embarked on its first-ever online virtual gala, named the Armchair Gala. Despite being unable to serve guests a warm meal in person, the eparchy instead made donations to local food banks across the province on behalf of all...
Read More

Gentlemen of the eparchy are invited to take part in a Men’s faith sharing group facilitated by Fr. Greg Faryna, and assisted by Alex Pankiw a seminarian at Holy Spirit Seminary. The group will focus on the call to holiness as presented in the Apostolic...
Read More

Who Was Saint Mary of Egypt?

Join Bernadette and Joyanne on this new episode of Saints in Our Lives as they discuss another important saint. In the third episode, we look at the life of Saint Mary of Egypt. This episode we discuss:  What does St. Mary tell us about repentance and coming back to...
Read More

What is the Feast of Jordan (Yordan), Theophany, Bohoyavlenia or Epiphany?

This document was adapted from responses gathered in breakout sessions at the 38th UCWLC Eparchial Convention Edmonton Branch Cultural Session, Oct. 2017 In January, we celebrate the great feast of Bohoyavlenia, which means the Manifestation of God or the Theophany....
Read More

Theophany of Christ (Jan. 6) Feast of Jordan Activities for the Domestic Church (the family)