Now, more than ever – remember the essential message of Easter 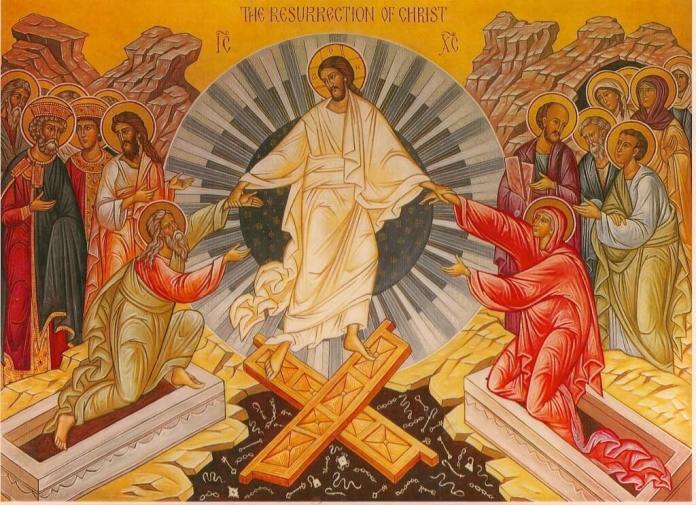 Whether you celebrate it by the Gregorian Calendar, or by the Julian, Easter, or Pascha, is the holiest day of the liturgical calendar for Christians around the world. This is because, as we sing in celebration, Jesus Christ “conquered death by death”. He died in excruciating pain. And we mean that literally, because the term excruciating means from the cross and derives from the word crucifixion itself.

According to our beliefs, Jesus first descended into hell bringing salvation to the souls who had died since the beginning of the world. This “harrowing of hell” as it is known, is the subject of one of the most prominent icons in Eastern Christianity. The icon depicts Jesus, vested in white and gold to symbolize His Divine Majesty, standing on the brazen gates of Hades (also called the “Doors of Death”), which are broken and have fallen in the form of a cross, illustrating that by his death on the cross, Jesus “conquered death by death”. He is holding Adam and Eve and pulling them up out of Hades. Traditionally, He is not shown holding them by the hands, but by their wrists, to illustrate the theological teaching that humankind could not pull itself out of its original sin, but that it could come about only by the work of God.

He returned to earth and on the third day after his crucifixion, Jesus rose from the dead. Through His suffering on the cross for our sins, and through His Resurrection, Jesus Christ bestowed the gift of eternal life for humankind.

Ukrainians have a very rich Easter tradition, which dates back to pagan customs practised long before the Baptism of Kyivan Rus’ in 988 A.D. These were related to the annual arrival of spring, which, in itself symbolizes rebirth. They include our beautiful and intricate Pysanky or Easter Eggs. This art is so ancient that no one knows when it really began. But we do know that the pagan Slavs who lived in the area which is now Ukraine worshiped the sun and saw a similarity between the yellow yoke of the egg and the sun, the white of the egg and the moon. When Ukraine accepted Christianity, the pysanka was adopted as a religious symbol. The shell of the egg now represents Christ’s tomb, the egg white is the burial linen, while the yolk is Jesus Christ himself, the Son of God.

Even the food we bless has religious significance. The Paska symbolizes Christ, Our Bread of Life; Eggs — New Life and the Resurrection of Christ; Horseradish — The Passion of Christ; Bacon — God’s Mercy; Cheese — the moderation that Christians should show in all things; Salt — The duty of Christians to others; Ham — The great Joy and abundance of Easter; Butter — The Goodness of Christ; and Kovbasa — God’s Favor and Generosity.

Holy Week begins with Palm Sunday, which commemorates the triumphant entrance of Jesus into the city of Jerusalem, when so many proclaimed Him “King” and placed palm branches along His route through the city. In Ukraine, it was often very difficult to obtain palms for this day, so pussy willow branches were substituted as they belong to one of the first trees to show signs of early spring life.

The first three days of Holy Week are devoted to preparing for Easter. Holy Thursday or Passion Thursday (“Strasny Chetver”) services recall the Passion of Our Lord Jesus Christ. The service consists of the reading of 12 Gospels from the Bible which tell the entire story of the suffering and hardship of Christ.

Good Friday is a solemn time that commemorates the day our Lord was crucified. Part of the services of that day include the ancient custom of the Veneration of the Holy Shroud (“Plashchanytsia”), which is a representation of the sheet that Christ was buried in following his death on the cross. It is accompanied by a solemn procession around the church, led by a worshipper carrying the Crucifix. In the procession, the elders of the parish carry the Holy Shroud, the priest carries the Holy Eucharist and the altar boys carry lighted candles and the wooden clappers. This procession is symbolic of the journey from Christ’s Crucifixion on Calvary to His Tomb. During Holy Saturday the parishioners visit the Plashchanytsia to worship and kiss the wounds of Christ. In many places, the Easter foods are traditionally blessed at a special service.

Easter Sunday morning in the Ukrainian tradition begins at sunrise. The service before the Divine Liturgy consists of a procession which circles the church three times. The journey is made to symbolize the trip of the women to the tomb to anoint the Body of Christ on that first Easter morning. After the third passage, the procession stops in front of the church doors, which symbolize the impossibility of being able to enter the Kingdom of God before the Resurrection of Jesus Christ. The priest sings the joyful Easter song “Khrystos Voskres” (“Christ is Risen”) the first time himself. All of the faithful repeat the triumphant hymn a second time. Then, striking the doors of the church with the crucifix to open them, the priest begins “Khrystos Voskres” a third time, as the congregation joins in. This dramatic entrance reminds us that Heaven is now available to all because our Savior has conquered death with His death. All enter the church and the Divine Liturgy of Easter, the Great Day, begins.

This year, however, Easter is celebrated much differently. Due to the COVID-19 crisis, people cannot gather, churches are closed and Divine Liturgies are broadcast through live streaming. But that does not in any way detract from the message of the Resurrection itself. As Patriarch Sviatoslav of the Ukrainian Greek Catholic Church explains in this year’s pastoral letter:

“In response to the darkness of separation and the fear one has of the other, as a possible carrier of the virus of death, on this night we encounter the living risen Christ, who passes through all closed quarantine doors, in order to encounter us, his disciples: ‘On the evening of that day, the first day of the week, the doors being locked where the disciples were for fear of the Jews, Jesus came and stood among them and said to them, ‘Peace be with you!’’ (John 20:19). Fear before all that might be touched by a person’s hand in a time of epidemic, gives way to the hand of the living God — the risen Christ, which carrying the wounds of the nails reaches out to us and reveals to us God’s limitless mercy! All of our sins and illnesses, pandemics and fears are conquered by God’s love. The physical chains of the present time have no power before the spiritual freedom of faith and spirit, before eternal life, given to us in Christ Jesus. In good time He will break down the doors of quarantine, take away the fear that lies ready to pounce on us behind these doors, and He will call on us to proclaim to the world, as once did the apostles, ‘Christ is risen!’”

So keep the faith, pray for an end to this crisis and especially pray for those who are performing the essential services we need at risk to themselves – the doctors, nurses, and all health care workers, the people who provide your groceries, the truckers who transport them and everyone else who contributes to dealing with this emergency. But, most of all and more than ever – remember and contemplate the essential message of Easter – the Resurrection and the promise of eternal life.