Oct 13; Commemoration of the Fathers of the Seventh Ecumenical Council, Octoechos Tone 1; The Holy Martyrs Carpus, Papylas and Agathonicus (249-51) 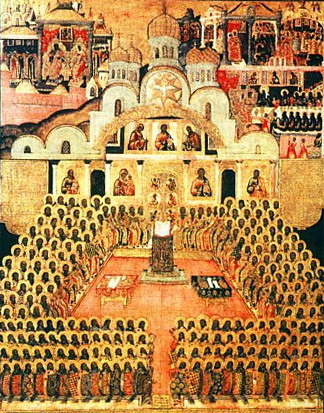 Kathisma Reading
“Blessed is the man…” is sung.0.

Accept our evening prayer, O holy Lord,* and grant us forgiveness of sins,* for You alone manifested the Resurrection to the world.

O you people, walk around Zion and encompass her.* And there give glory to Him Who is risen from the dead.* For He is our God* Who delivers us from our sins.

Come you people, praise and worship Christ.* Glorify His Resurrection from the dead;* for He is our God Who delivered the world* from the deceit of the enemy.

Rejoice, O you heavens;* sound the trumpets, you foundations of the earth;* cry out with joy, O you mountains.* For behold, Emmanuel has nailed our sins to the Cross;* the Giver of Life has put Death to death;* and the Lover of Mankind* has raised up Adam.

Truly the Seven Councils of the Fathers* although held at various times* were brought together under the canons and in good order* by the Patriarch Germanus the New.* By inscribing and establishing their doctrines* and offering themselves as intercessors with the Lord,* the Fathers are protectors of our salvation* and shepherds of the fold.

The Book of the Law has truly honoured the seventh day for the Hebrews* who were dispersed in the shadow of the Law and devoted to it.* But you Fathers, by your participation in the Seven Councils,* by the inspiration of God who in six days finished this universe* and blessed the seventh day,* have made it even more honourable by decreeing the bounds of faith.

You have given all, O thrice-blessed Fathers,* to know the Father, the Son, and the Spirit clearly by their works:* the Trinity who is the cause of the creation of the world.* By your mystical speech* you called the first three Councils and then the next four.* You have appeared as champions of the true faith,* proving that the Trinity is truly the Creator* of the four elements and of the world.

It would have sufficed Elisha the Prophet* to bend but once to instil life into the dead son of the servant,* but he kneeled and bent seven times.* Thus, in his foreknowledge he prophesied your gathering* through which you revived the Incarnation of the Word of God,* and humiliated Arius and his co-workers.

In wisdom, O venerable Fathers,* you patched the garment of Christ* which had been torn by barking dogs;* for you could not possibly bear to see his nakedness,* like Shem and Japheth of old,* who could not bear to see the nakedness of their father.* Thus you confounded the foolish Arius* and all those who followed his doctrines.

O Fathers, you are the true shepherds* who expelled from the Saviour’s fold* the Macedonians and the Nestorians,* the followers of Ephtechnis and Dioscorus,* Appolonarius, Sabellius, and Severus* because they became devouring wolves hidden in the skins of lambs.* Since you exposed these wretched ones, we truly honour you.

Let us honour today those mystical trumpets of the Spirit,* namely the God-mantled Fathers* who, speaking of divine things,* sang in the midst of the Church a hymn in unison,* teaching that the Trinity is One,* not differing in Substance or Godhead,* refuting Arius and struggling for the true faith.* They always intercede with the Lord* to have mercy on our souls.

Let us sing a hymn of praise to the Virgin Mary,* glory of the whole world!* She was herself formed by human seed,* yet she became the Mother of the Master, the Gate of heaven,* the theme of the angels’ hymn and beauty of the faithful.* She was seen as being heavenly* and the Tabernacle of the Godhead.* She indeed tore down the wall of enmity between God and man,* and brought peace in its place, she opened up the kingdom of heaven.* Let us therefore cling fast to her for she is the anchor of faith,* and let us receive as our stronghold the Lord Who was born of her.* Be of good cheer, then, and have confidence, O people of God,* for He will fight our enemies for us, He is all-powerful!

Let all creation rejoice, let the heavens be glad,* let the nations clap their hands with joy.* For Christ our Saviour, in His love for mankind,* has nailed our sins to the Cross;* He has put Death to death,* and by raising our fallen forefather, Adam,* He has given life to all mankind.

O God, You are above all understanding;* You are King and Lord of heaven and earth.* Yet of Your own free will,* You allowed Yourself to be crucified because of Your love for mankind.* When You descended below,* Hades was filled with bitterness as You confronted it;* but the souls of the just received You with great joy.* Adam arose when he saw You, his Creator, down in the depths.* What a wonder this is!* You are the life of all and have tasted death* in order to dispel the darkness of the world with Your light.* O Lord, risen from the dead, glory to You!

The myrrh-bearing women were filled with grief* as they hastened with spices to Your tomb;* but they did not find Your most pure body.* Instead, they found an angel* who proclaimed Your unique and glorious Resurrection,* and commanded them to announce to Your Apostles:* The Lord is risen, granting great mercy to the world.

Come all you people of the true faith,* let us celebrate today in faith and true worship* the anniversary of the God-mantled Fathers* who came together in the splendid city of Nicaea* from the whole inhabited world.* These Fathers, in the wisdom of their pious minds,* refuted the impious belief which the wretched Arius had invented.* They banished him from the universal Church by a decree of the Council.* They instructed all to confess openly* that the Son of God is consubstantial and co-eternal with the Father before all eternity,* decreeing the same with precision and true worship in the Canon of Faith.* Therefore, following their divine doctrines,* in true faith let us worship the Father and the Son and the most Holy Spirit,* the consubstantial Trinity in one Godhead.

O most pure Virgin, hear the petitions of your servants.* Remove the burdens which oppress us,* and deliver us from our sorrows;* for you are the only firm and constant support on whom we rely.* O Mother of God, never permit us who call upon you* to be overwhelmed by our cares.* Hasten to fulfill the supplications of all who, in faith, cry out to you:* Rejoice, O Lady, helper of all mankind,* the joy, the refuge, and the salvation of our souls.

In Tone 1
Though the stone was sealed by the Judeans* and soldiers guarded Your most pure body,* You arose, O Saviour, on the third day* and gave life to the world.* And so the heavenly powers cried out You, O Giver of Life:* Glory to Your Resurrection, O Christ!* Glory to Your Kingdom!* Glory to Your saving plan!** O only Lover of Mankind.

In Tone 8, Glory…
O Christ our God, You are above all praise* for You established our Fathers as lights to all the earth.* You led us to the true faith through them.* O Most Bountiful Lord, glory be to You!

Now…
O gracious Lord, for the sake of mankind You were born of a virgin;* through Your death on the cross You conquered death;* and through Your resurrection You revealed yourself as God.* O merciful Lord, do not disdain those whom You have created with Your own hands,* but show forth Your love for mankind.* Accept the intercession which the Mother, who bore You, makes in our behalf.** O Saviour, save Your despairing people!

Troparia and Kontakia
Troparion, Tone 1: Though the stone was sealed by the Judeans,* and soldiers guarded Your most pure body,* You arose, O Saviour, on the third day,* and gave life to the world.* And so the heavenly powers cried out to You, O Giver of Life:* Glory to Your resurrection, O Christ!* Glory to Your kingdom!* Glory to Your saving plan,* O only Lover of mankind.

Troparion, Tone 8: Christ our God, You are glorified above all,* You established our fathers as beacons on the earth* and through them guided all of us to the true faith.* Glory to You, most compassionate Lord.

Kontakion, Tone 1: You arose in glory from the tomb* and with Yourself You raise the world.* All humanity acclaims You as God.* and death has vanished.* Adam exults, O Master,* and Eve, redeemed from bondage now, cries out for joy:* “You are the One, O Christ, Who offer resurrection to all.”

Kontakion, Tone 6: The Son who ineffably shone from the Father* was born two-fold of nature from a woman.* Beholding Him, we do not reject the image of His form;* but depicting it, we revere it faithfully.* Therefore the Church, holding the true faith,* kisses the icon of Christ’s becoming man.

Now and forever and ever. Amen.

Theotokion, Tone 6: Undaunted patroness of Christians,* O steadfast intermediary with the Creator,* turn not away from the suppliant voices of sinners,* but in your kindness come to help us who cry out to you in faith.* Be quick to intercede, make haste to plead,* for you are ever the patroness of those who honour you, O Mother of God.

Prokeimenon, Tone 4
Blessed are You, Lord God of our fathers,* and praised and glorified is Your Name forever.
verse: For You are righteous in everything that You have done to us. (Daniel 3:26-27

Alleluia, Tone 1
verse: The God of gods, the Lord, spoke and summoned the earth from the rising of the sun to its setting.
verse: Gather to Him His devout ones, who with sacrifice make covenant with Him. (Psalm 49:1

Communion Hymn
Praise the Lord from the heavens,* praise Him in the highest.* Rejoice in the Lord, O you just;* praise befits the righteous.* Alleluia, alleluia,* alleluia. (Psalms 184:1; 32:1)