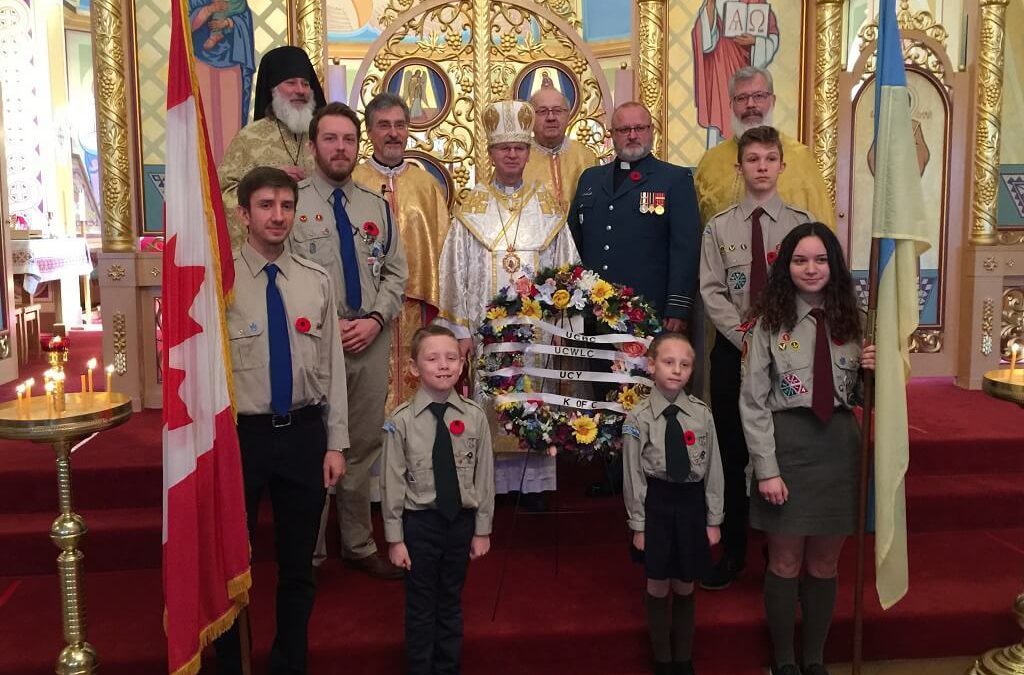 This year’s Remembrance Day coincided with the Cathedral Feast Day commemorating St. Josaphat the Hieromartyr as well. The Liturgy began with a solemn procession of the Bishop and clergy, altar servers and youth of the Ukrainian Youth Association (CYM) carrying in the flags of Canada and Ukraine. The Cathedral choirs under the direction of Denise Lucyshyn sang a particularly majestic bilingual liturgy for this special event. In his homily, Bishop David highlighted the 100th Anniversary of the end of World War 1 and spoke of the huge sacrifices of countless men and women in the military throughout the decades. The significance of Remembrance Day is not only for remembering and for honouring the fallen but is a reminder for all to work toward peace in our world. Bishop David noted the current wars in Ukraine and Syria and elsewhere and encouraged prayer to achieve peace in the world. Edward Hladunewich, President of the Cathedral branch of the Ukrainian Catholic Brotherhood of Canada and Carol Batty, President of the Cathedral branch of the Ukrainian Catholic Women’s League of Canada jointly laid a commemorative wreath before the Iconostas in remembrance of all who died protecting our freedoms and liberty. The Liturgy concluded with all singing the moving Vichnaya Pamiyat-Eternal Memory in honour of the fallen.

All parishioners and guests were invited to attend the Praznyk dinner at the parish Verkhovyna hall. This welcoming family-oriented event provided an opportunity for fellowship over a good meal. The Praznyk Master of Ceremonies was Parish Council Chairman Rick Doblanko. The guest speaker at the event was Lt. Col. & Rev. Taras Cherwick who had a fascinating presentation about the work of the Canadian military since World War 1 to today. He underscored the very important work done in training troops abroad, in peacekeeping and noted the contributions made to the military in Ukraine, Latvia and other countries. The parish choir rounded out the Praznyk program performing several choral selections.

The concept of holding a parish Remembrance Day Commemoration was brought forward by parish UCWLC President Carol Batty in 2017 as a way to bring the parish together for this truly important day and to recognize the many parish members who have served in the military, during the Cathedral’s 114-year history. As this event has been very well received and well attended, it is safe to say that St. Josaphat Cathedral has a new tradition to keep and grow in the years to come. May we always remember the enormous sacrifices made by the noble and brave men and women who have fought and died throughout the generations so that we may live in a peaceful and prosperous land!