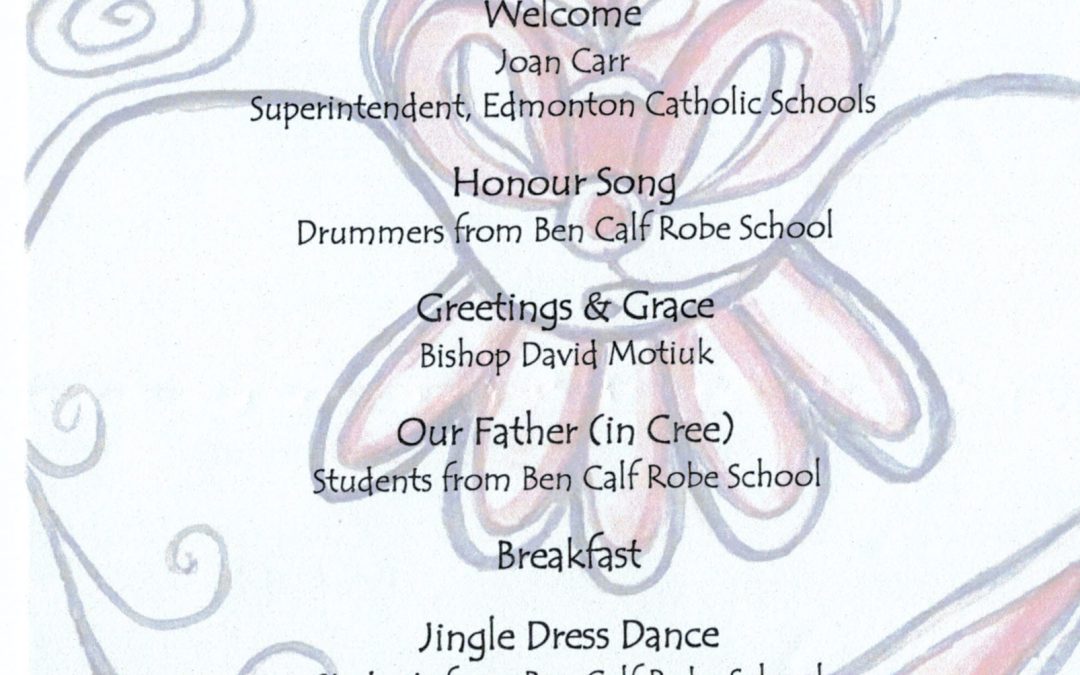 “We’re breaking ground here and this is cutting edge collaboration with two different unique cultures and I think this is the beautiful part of this collaboration … as two entities coming together and making something more beautiful.”

At the prayer breakfast, Elder Betty Letendre shared the experience of a traditional Cree welcome – the protocol offering of tobacco from Joe Naccarato, Edmonton Catholic Schools Assistant Superintendent responsible for Learning Services Enhancement, who played a major role in ensuring the prayer breakfast was a success. This ritual was followed by a group of young Indigenous drummers from Ben Calf Robe and St. Clare of Assisi Catholic School and their instructor Lloyd Cardinal performing the Honour Song, a ceremonial invitation to the breakfast celebration.

Elder Betty spoke eloquently about the Cree belief in the interconnection of all of nature, from humans to plants, to animals and even insects such as ants. She observed that perhaps these tiny creatures were more deserving to be on earth than humans because ants are carrying out the function they were created for and not hurting anything else. Humans, on the other hand, are destructive of our world and its creation. 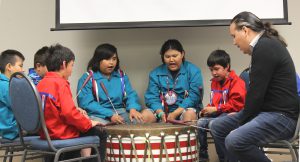 Elder Betty is a traditional Cree/Métis woman from the Papaschase Band and a direct descendant of Papastewo. She grew up in the area northeast of Lac La Biche and “has been honoured for many years to hold, share, and serve as a living model of ancestral sacred laws through her role as a Kehteya (Elder),” said Joan Carr, Edmonton Catholic Schools superintendent and breakfast master of ceremonies in her introduction of Elder Betty. “The wisdom and knowledge she carries has earned her the right to sit in the north direction, along with the Old Ones.”

Elder Betty also advocates for children and is frequently a speaker at conferences, workshops, and public gatherings. She has and continues to hold professional management and leadership positions in school and Indigenous organizations. She dreams of helping to build a just and safe society where all peoples work together towards a shared vision of humanity. 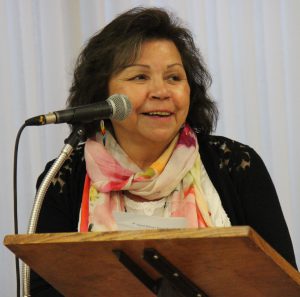 In opening the breakfast, Elder Betty led the Lord’s prayer in Cree with two students from Ben Calf Robe-St. Clare school, Braydon Callihoo and Elise Szolosi. Later she read the Prayer for the Laity, Clergy, Religious and Monastics that she composed in Cree specially for this event. {LINK}

Elder Betty also introduced Anna Marie Sewell, of Polish and Ojibway descent, who is Edmonton’s fourth poet laureate. Anna Marie read the poem {LINK} she specifically wrote for the Ancestors and Elders production in which she incorporated elements of English, Ukrainian and Ojibwa.

One hundred gifted artists, musicians, choreographers, actors and costume designers from both cultures joined together to create the Shumka production, Ancestors and Elders, noted breakfast keynote speaker Darka Tarnawski, executive director of, and former dancer with, Ukrainian Shumka Dancers and Shumka School of Dance. “This was the most fulfilling project I have ever worked on.” {LINK}

“Ancestors & Elders was an exploration of tradition and truth in a collaboration between Ukrainian and Indigenous artists, a portrayal of true compassion and humanity,” according to Darka. “When I first heard a story of Aboriginal peoples providing assistance to Ukrainian settlers in Alberta in the early 1900s, I knew it had to be explored. These berries are safe to eat. This basket of medicinal herbs will heal you. You can stay warm here. 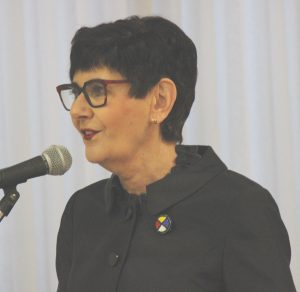 “Through the process, I also heard stories of Ukrainian immigrants helping their Indigenous neighbours, providing occasional work and shelter on their farms, and hiding Indigenous children who had run away from the harsh environment of Indian residential schools.”

Darka shared the story that one of the visual artists in the production, Lana Whiskeyjack, “was raised by a Ukrainian foster family whom she loved dearly and who hosted Whiskeyjack travelers on many occasions with traditional Ukrainian hospitality.”

Although the participants in the production learned much about the past interactions between Ukrainian settlers and Indigenous Peoples, they also discovered that there are still many similarities between our cultures: embroidery, percussion in music, respect for the land.

The production brought together interesting creators from both cultures, as for example, the second visual artist, Svitlana Krawchuk. Svitlana is a first generation immigrant from Ukraine, married to a Cree. This relationship enables her to create across hers and her husband’s “spiritual cultures.” The two visual artists, Lana and Svitlana, “shared stories and painted images that were used in projections on seven large panels above the stage,” Darka observed.

Indigenous and Ukrainian costumes were blended by Megan Koshka and merged with pieces representing earthly elements, like flora, fauna, day, night, water and soil, wind and fire, demonstrating the respect each culture has for all creation. Ukrainian and Stony Nakoda musicians and composers developed the music. 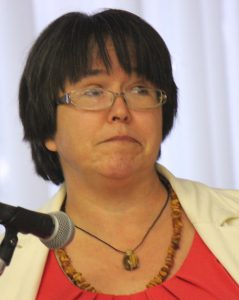 The producers discovered and were able to blend the different approaches that each culture uses to create. Shumka’s focus is precision of stage dance and Running Thunder’s  is ceremony. So, in a pipe ceremony held in Edmonton’s river valley, the two cultures’ called upon ancestors and elders to bless their common journey and before the actual performance at the Jubilee Auditorium in April the production team held a circle of unity with a ceremonial smudge.

Working together on the success of this project, participants from both cultures had the opportunity to share their thoughts, dreams, prayers and hugs. For Darka, being a part of this creation has instilled in her more of a feeling of Canadian identity, rather than simply a focus on her Ukrainian background.

Learn more about the process and challenges faced by the Ukrainian Shumka Dancers and their Indigenous partners in the creation of Ancestors and Elders. 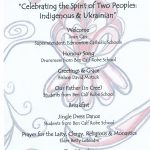 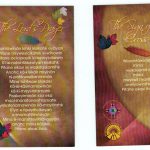 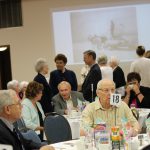 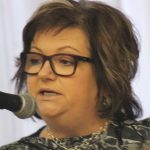 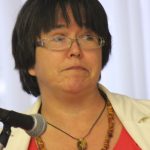 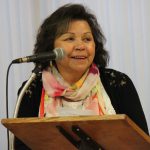 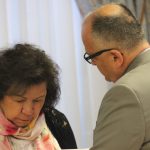 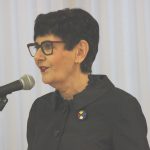 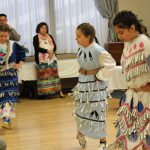 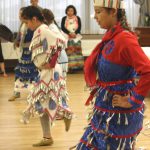 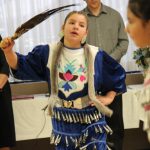 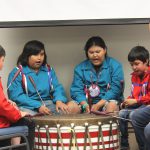 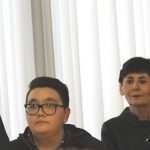 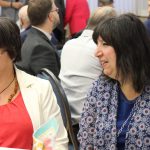 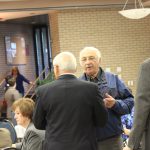 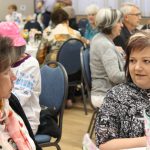