(T)he aim of interreligious dialogue is not to convert the other, rather seek those things which are common to the different religions and thus work jointly for the better of humanity and promote peaceful co-existence and respect for the others’ religion.

Since 9-11 North American society has been nervously focusing on the differences in beliefs between Muslims and North Americans of other religious affiliations or of no affiliation at all. A lot of attention has been paid to certain interpretations of the Islamic Holy Book, the Quran, that appear to encourage violence against non-Muslims. 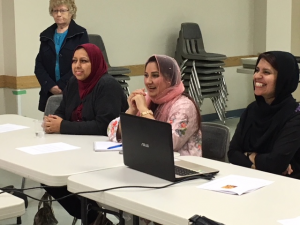 Unfortunately, the moderate voices of the followers of Islam, who deny that Muhammad promoted forced conversions and violence against “infidels” are drowned out by those who either have a poor understanding about how the Quran is interpreted or have an investment in ensuring that the barriers between believers, rather than peace, are maintained.

Terrorists, or simply nut cases claiming affiliation with a darker Islam, have been causing havoc, blowing up bombs at airports and other places where large numbers of people gather, driving vehicles into city pedestrians, “taking out” journalists and using other heinous means of killing innocent people.

This is the image of Islam we are asked to embrace.

But what about those concepts and beliefs that we share, regardless of our affiliation – Christian, Islamic, Buddhist or Hindi? We have not taken the time to look for what we have in common.

In the Capilano neighbourhood, not many city blocks away from Edmonton’s St. Nicholas Ukrainian Catholic Church, quietly resides the Baitul Hadi Mosque. In the interest of being a hallmark of peaceful co-existence of our diverse cultures and faiths, a number of members of the parish’s Ukrainian Catholic Women’s League of Canada tapped into the splendid opportunity for us, women from both belief arenas, to reflect on our common humanity.

With this in mind, several of our members approached the Ahmadiyya Muslim Women’s Association at the mosque, inviting them to visit us at one of our meetings and provide our membership with a better understanding of their organization, their activities and their focus.

We learned that we have a lot in common in terms of our respective faiths. For example, we all believe in a generous, loving and merciful God. The importance of faith being taught, learned and heartily practiced in the home and in the community was another meeting point. Muslim children are inculcated in their faith, birth to grave.

The dignity of women provided more common ground for us to consider. The right of women to choose how they respond in their faith, yet another. For example, some Muslim women wear a hijab as a sign of their modesty, others do not feel they need this external indicator.

As women, regardless of culture or faith, we share a great deal of the same nurturing character God intended when He created our gender. 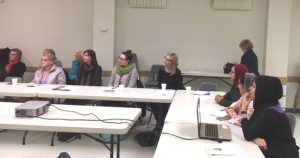 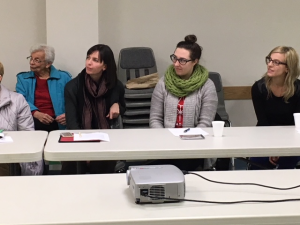 Historically, we also share practices that appear to have come down from Abraham, our mutual ancestor. Like Jewish and Muslim women, Ukrainian Catholic women in the past followed the same laws of cleanliness. A woman who had given birth to a child did not attend the temple, mosque or church for 40 days. She then underwent a “cleansing” ceremony prior to resuming normal life in the community.

Although most of us are mothers, some solely devoted to the comfort of their families, others also pursue professional careers.  Three of the presenters at the UCWLC meeting have university degrees. One works as a family medicine physician. Another has been in management positions, another a Sunday school teacher. All also volunteer within their faith communities.

At the conclusion of this discussion session, the Ahmadiyya Muslim Women’s Association representatives invited the UCWLC membership to the annual interfaith symposium they were hosting in a number of weeks. At this event representatives from a number of Christian, Muslim and other faiths were scheduled to provide an overview of their religions.

Following on a suggestion from one of our members that a small informal gathering would provide a good venue for the exchange of ideas and information, the women from the mosque organized, and invited us to, a tea at the mosque. This was a valuable experience, indeed, as we began to bond as women with common interests, perspectives, needs and goals.

“The idea of hospitality goes back to biblical times, when people would open their homes to guests, even strangers, and break bread. This idea of sharing a meal leads to shared conversation, shared ideas, shared fellowship and connections,” writes event planner Amanda Luppino-Esposito. And so at each of the Muslim and Catholic women’s sessions, both organizations prepared and served tasty snacks over which friendly and candid discussions were held.

The greatest lesson we learned from these encounters is that there is endless potential for us to explore the similarity in our diversity and to engage each other in positive, peaceful relationships that lead us into the peaceful co-existence God intends for all His creation. It behooves us to put far less focus on the differences and open our eyes to our common humanity.

In this turbulent era, when tragedies and terrorism are repeatedly inducing hatred of that which we do not understand, what a fitting time to open our doors and our hearts to each other through conversation and hospitality.