Praznyk reached out to the community: The Holy Spirit at work at Festival of the Mother of God 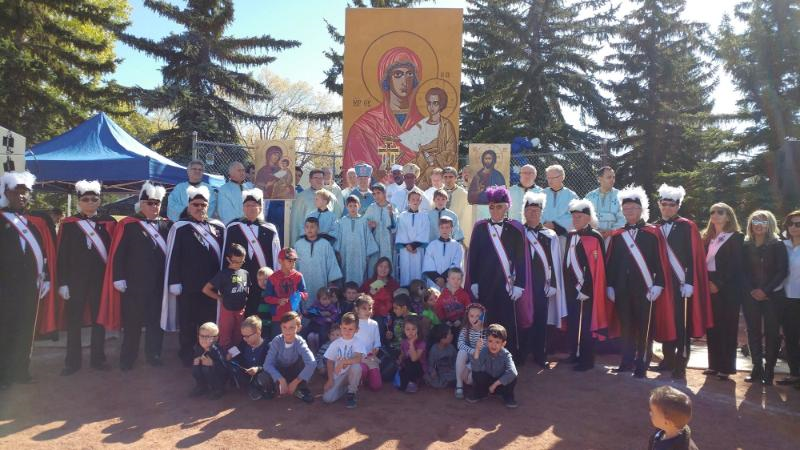 St. Stephen Protomartyr parish in Calgary is celebrating its 50th anniversary this year and Canada its 150th. To commemorate this nation’s milestone, Catholic bishops across Canada dedicated our country to the Mother of God.

Our parish praznyk is in December which is not a great time to celebrate, so we have traditionally celebrated the praznyk in September. There is an old saying that “if you always do what you have always done, then you will always get what you always got.” The 50th Anniversary committee, led by Fr Bo (Bohdan Nahachewsky), came up with an idea to do something different for praznyk this special year. 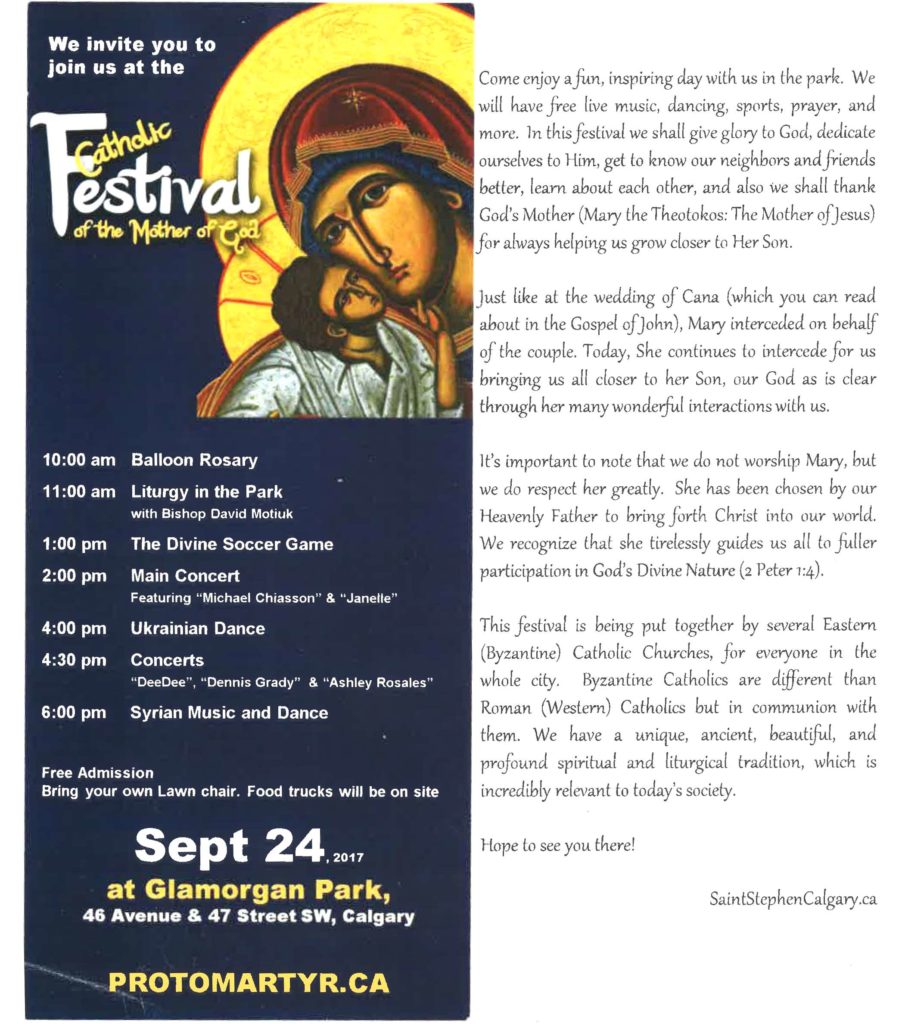 In the past, praznyk usually went something like this: the ladies of the parish spent hours or days preparing food, then there may have been some entertainment by the children and/or youth and then some speeches. In the last few years we were attracting fewer and fewer people to the praznyk dinners and the ladies were getting tired of preparing and serving the meals. So what to do?

If we can’t bring people to the praznyk any more, perhaps we could bring the praznyk to the people.  The idea was born to have a “Praznyk in the Park”. An event emerged which was given the name, “Catholic Festival of the Mother of God.” To make this a community event the parishes of the Assumption of the Blessed Virgin Mary Ukrainian Catholic (ABVM) and St. Basil’s Melkite Catholic church were invited to join in.

After a few months of planning, the Festival was staged in a large city park located a couple of blocks from St. Stephen’s church. A stage was erected and sound system technicians and entertainers were contracted.

So far so good. Now for the food.

Because we did not want any parishioners to have to labour but enjoy the day instead, we contacted four food trucks who were more than happy to set up for this event. To keep all the Ukrainian parishioners happy we had a Ukrainian food truck on site.  As well, there was a truck which specialized in Middle Eastern food, the Dog Father with Canadian fast food and a mini-donut truck.  These did not cost us anything. 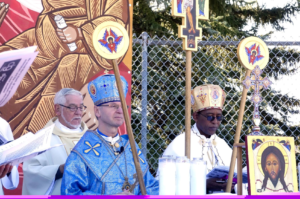 In the park we used the ball diamond backstop as the area to set up the stage and altar. Hundreds of pictures were taken and recorded. We had a few chairs set up for seniors and a handicap area, but people were encouraged to bring their own lawn chairs. An outline of the seating areas was spray-painted on the ground.

The morning started off at 10 o’clock with a balloon rosary, in which the rosary was recited and helium balloons were tied together to form a large rosary in blue with a large white balloon cross at the end. Eventually this floated skyward. One of the attendees told us that he saw it several hours later floating over the north end of the city.

The Divine Liturgy began at 11 o’clock with the main celebrant being Bishop David Motiuk of the Ukrainian Catholic Eparchy of Edmonton.  We were blessed that by chance Bishop Fikremariam Hagos of the Eritrean Rite was in Calgary that weekend and attended with one of his local priests. 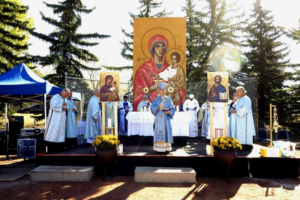 There was a combined choir made up from members of ABVM, St Basil’s Melkite and St Stephen’s parishes.

That afternoon in the park, I personally met people who were of Lutheran and Anglican backgrounds as well as individuals from at least five Roman Catholic parishes.
A hit of the afternoon was a youth soccer game with priests and nuns playing on the teams with them.  Talk about flying nuns.  It certainly let the youth know that our religious are real people.

The afternoon then started off with a Catholic Rock band by the name of “Janelle”.  The band really got things rocking.  They were a bit loud but all seemed to enjoy the family group. Next was Michael Chaisson, a young Catholic motivational speaker dedicated to service for the youth of our community. 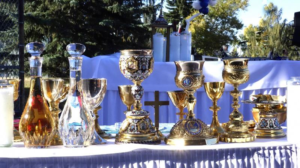 Of course, there were some Ukrainian dancers, followed by Denis Grady and his country Christian band, the “Dee Dee” group, followed by Ashley Rosales, a young lady with the marvelous voice of an angel. Finally, a choral group from St. Basil’s Melkite parish performed songs in Arabic.

We also had two bouncy castles, face painting, a tug of war competition, and playground equipment on site for use by the young people.

The afternoon festivities finished at about 6:45.

The idea for this event was to invite people from the broader community to worship with us, and to evangelize others, as well. There are several stories to relate to give readers an idea of how the Holy Spirit was at work. 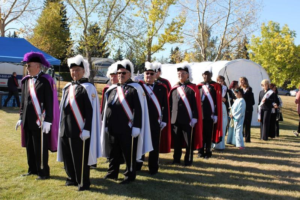 1. During the Christian Rock band concert, a lady came walking up in her pajamas. She related her personal story that she was being treated for lung cancer and did not usually venture outside her home. She lived in a high rise apartment building three blocks away and could hear Christian rock music coming through her open balcony and recognized some of the songs. She thought that it must be coming from someone’s car stereo in her parking lot so she ventured outside. Finding no one there she followed the sound of the music and arrived at the park.  It was the first time she had been outside her apartment, other than for treatments, in a long time. She said it was very uplifting for her.

2. An elderly couple who lived across from the park came out to see what was going on. They had not been to any kind of church service in years. Moved by the Divine Liturgy, they ended up staying the whole afternoon. They said it really made them feel like part of the community.

3. A young man who lives in a nearby group home came and stayed. He said he felt very welcomed by many people.

In total, we estimate that approximately 700 people were in attendance at the Divine Liturgy and others who arrived later for the afternoon events. Many people actually brought their own picnic lunches and shared with family and friends. My wife quickly went through a large jar of pickled herring, sharing with those near us. It was so encouraging to see people of all ages, young and old, as well as families with children.

There was a substantial cost to host this event, however with donations from organizations such as the branch Ukrainian Catholic Women’s League of Canada, Knights of Columbus and private and corporate sponsors, there was no out-of-pocket expense for the parish.

We were blessed by the weather and sunshine on this day, even though the morning was a bit cool.

Special recognition has to go out to Father Bo, Fr. Ephrem Kardouh and our parish program coordinator Mirna Farhat. There were many other hardworking unsung heroes involved in the event to make it such a success. It was a true community event bringing people, parishes and organizations together to work for a common cause. It was our plan to make this something different, something special.

The times are changing and we need to step outside our comfort zone to bring people to the Church and extend the hand of evangelization.