Most people in the Ukrainian communities in Canada and abroad know Marco Levytsky as the editor of the newspaper Ukrainian News, for many years the largest Ukrainian publication in Canada. Many don’t know the interesting persona behind the journalist.

This time of transition, when the 89-year-old Ukrainian News  (1928, Western News) is merging with the 87-year-old (1930) New Pathway provides a good occasion to have a look at the key driver of a long-lasting publication headquartered in the West and the move of the new joint entity into the future.

Creative Roots
Marco was born in Winnipeg to a prominent Ukrainian artistic couple. His mother, Maria Levytsky (Lutska) “was an actress, theatre director and costume designer for the Zahrava Ukrainian Theatre group in Toronto,” says Marco. “She also worked at the Ukrainian Credit Union.” Maria Levytsky passed away in 1986 at the age of 68. 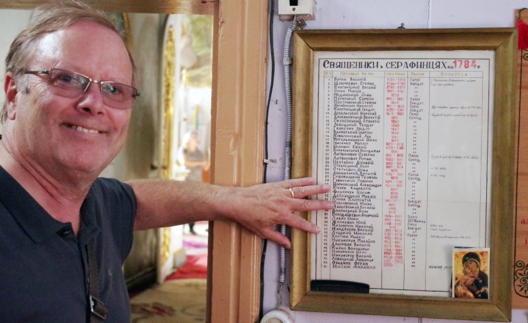 Marco points to his grandfather’s name in the list of priests who served in the Church of the Transfer of the Relics of St. Nicholas in Serafyntsi, Ivano Frankivsk Oblast, since 1784.
-Photo by Andriy Dorosh, Marco’s second cousin

Among other artistic undertakings, Marco’s father, Myron Levytsky, painted murals and icons in at least five churches in Australia and Canada, most notably Holy Eucharist Ukrainian Catholic Church (УКРАЇНСЬКА КАТОЛИЦЬКА ЦЕРКВА ПРЕСВЯТОЇ ЕВХАРИСТІЇ) on Broadview Avenue in Toronto, a church designed by architect, Radoslav Zuk. Myron Levytsky was also a writer, who wrote articles and published a book. He passed away in 1993 at the age of 79.

When Marco was two years old, an only child, his family moved from Winnipeg to Toronto where he was raised and educated in both the publicly-funded school system and private Ukrainian schools. He has an extended family network in the United States, Ukraine, and the Czech Republic.

Marco attended evening or weekend private Ukrainian schools through the elementary and secondary levels and was a member of the Ukrainian youth organization Plast.

He graduated from the University of Toronto in the early 1970s with a Bachelor of Arts degree in History and Political Science. During his student years he also served as president of the Ukrainian Students’ Club. In the mid- to late-1970s, he undertook post-graduate Soviet and East European studies and journalism at Carleton University.

Marco came to Alberta in 1980 as a reporter for the Bonnyville Nouvelle. Two years later, Ukrainian Catholic Eparchy of Edmonton Bishop Demetrius Greschuk hired him as editor of the Ukrainian News, a publication of the Eparchy. He took over from co-editors Fr. Nicholas Diadio, and Mykhaylo Chomiak. A year later he took on the additional responsibility of the publication’s general manager.

In 1990, Marco married Lesia. They have one daughter, Christine Kope (Kelly), a teacher in the Edmonton area, and two granddaughters, Cailyn and Kyla. All are members of St. Nicholas Ukrainian Catholic Church in Edmonton. 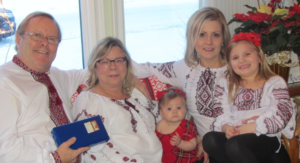 His parents’ creative genes are apparent in Marco. He is a journalist and an editor. His newspaper layout skills speak of his penchant for design.

For many years, Marco has been a member of St. Nicholas Ukrainian Catholic Church choir. He also sings in Dnipro and the Ukrainian Male Chorus of Edmonton.

Staying connected to his Ukrainian roots is high on his priority list. In addition to keeping in close touch with, and reporting on, what is making news in Ukraine, he is also an active participant in Alberta’s Ukrainian community.  He serves as past president of the Alberta Foundation for Ukrainian Education Society, on St. Michael’s Health Group Board of Directors, as an executive member of the Edmonton branch of the Ukrainian National Federation and member of the Ukrainian Community Council, Servus Credit Union, and the Ukrainian Professional and Business Association of Edmonton, of which he was president from 2003 to 2011.

Marco has also been associated with the Ukrainian Canadian Congress – Alberta Provincial Council as director and as member of the National UCC’s Justice Committee, president of St. Nicholas’ Ukrainian Catholic Brotherhood of Canada, and he headed the Alberta UCC’s 70th anniversary Holodomor Commemoration Committee.

In August, Marco toured Spain and Portugal with the Ukrainian Male Chorus of Edmonton The group sang Divine Liturgy responses in one Catholic and two Orthodox churches followed by impromptu concerts in the church courtyards. The choir also participated in a competition, winning second place in two categories.

“New Ukrainian communities sprang up in Spain and Portugal in the late 1990s,” Marco explains. At that time many Ukrainians left their homeland to find work in other European countries. “They were legalized in Spain and Portugal through an amnesty and so became citizens. There are about 50 parishes in Portugal alone.”

Reaching out to new generations
In the late 1980s, it became apparent that the information needs of the Ukrainian communities in Canada were changing and the paper was suffering financial losses. A renewed style for the Ukrainian News became a focus for its future survival. Increased use of the English language became the key new approach to gain increased readership.

“Bishop Greschuk suggested I take it under my wing with my own company,” Marco elaborated, “then I could implement improvements.” In 1988, Ukrainian News became an independent communication vehicle under an incorporated company set up by Marco. Ukrainian Canadian community news and cultural heritage, advocacy, and news from Ukraine became its focus, rather than local, regional, and Canadian national news that were generally available in English language publications.

“Mainstream media jumps on the issue of the day then moves on to something else, quickly neglecting yesterday’s issue of the day,” says Marco. For example, at first the Ukraine-Russia dispute over Crimea and the occupation of Eastern Ukraine made all the headlines, then Syria, Trump and Charlotteville, Virginia. Marco has tried to present a balanced view of all the news of concern to Canadians of Ukrainian origin.

The merger between Ukrainian News and New Pathway became an option when the long-term sustainability of Ukrainian News came under consideration. Independent Ukrainian newspapers in Canada have a history of being swallowed up by other publications and disappearing once the original owner retires or otherwise steps away. “Ukrainian News has long been a financially viable independent publication,” says Marco. However, having recently turned 65, he “decided that a merger with a newspaper like the New Pathway, supported by the Ukrainian National Federation, would ensure continuity of the Ukrainian News name and its tradition.”

Where he grew up in Eastern Canadian the community was internally-focused, engaged with concerns of a Ukrainian national nature as most were political refugees, and very dedicated to the retention of the Ukrainian language. Their outlook, expectations, needs, and interests differed from those of Western pioneers and their descendants. (Ironically, New Pathway began life in Edmonton, then moved to Winnipeg, finally settling in Toronto.)

Given the two distinct strengths of the original publications, it made sense to join them together. The merger was finalized in June of this year. Marco would like to see the new publication continue the tradition of both.

Marco reiterates that although he is “relinquishing the business end of the newspaper,” he is “not retiring as a journalist.” He will continue as English language editor focused on running the Western Canada operation that will report on local and national news for the merged New Pathway-Ukrainian News. He will also be seeking out politicians’ views on emerging issues and relations with Ukraine.

Ukrainian community’s evolution
During his time as editor of Ukrainian News, Marco has seen a community evolving in its character. The major change has been that Albertans of Ukrainian descent have become more united.

“The language use may be dropping off, but we have the bilingual school system to support it,” he adds on a positive, hopeful note.

Marco’s Musings
Although the Ukrainian government is more democratic now, Marco believes, it is “still quite corrupt and will need to make a more serious effort to eliminate the corruption.” 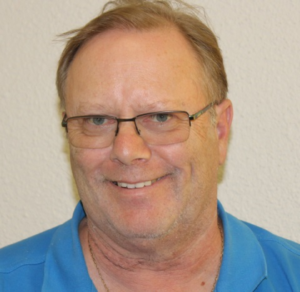 The country has been well represented in Canada by both previous and current governments, although the Harper government “was more vocal” with its support than the current Trudeau leadership. Some of the big business interests currently operating in Canada are not sanctioned by the Canadian federal government, Marco notes. He believes they should be.

Operation Unifier, a training program for Ukraine’s military supported by Canada’s counterparts is working. In September, Marco visited the International Peacekeeping and Security Centre in Starychi, Ukraine, and found that the medical aid Canada has been providing to Ukraine “is very effective. [The kits] have saved many lives.”

Ukraine has good representation in all three federal political parties, according to Marco.  He believes that Canada’s backing of the Magnitsky law by recommending expansion of Canada’s sanctions against “gross human rights violators” reflects this positive concern.

The Canada-Ukraine Parliamentary Program (CUPP) is another example of valuable Canadian contribution to Ukraine’s wellbeing. This initiative is a parliamentary internship program that enables undergraduate university students from Ukraine, who demonstrate academic excellence and a working knowledge of Ukrainian and either English or French, to learn about democratic government and parliamentary procedures. With the assistance of a CUPP scholarship, students work and study in Canada’s Parliamentary system to gain an understanding of democracy.

“What is still needed, however, is for Canada to provide Ukraine with radar satellite imagery technology and lethal arms.

(Along with his recent visit to the Ukrainian military base, Marco also had the opportunity to see the “gold-plated palace” of deposed former Ukrainian president Viktor Yanukovich, the Ukrainian Catholic University in Lviv, and the Basilian Christ Lover of Mankind Church in Zhovkva, Ukraine, with interior murals painted by Prof. Julian Bucmaniuk, who also decorated St. Josaphat’s Cathedral in Edmonton.)

Looking to the future
Marco hopes the new merged publication continues to meet high journalist standards and attracts an ever-increasing readership.  Within the new structure, he has found reporting to a board of directors different from operating his own newspaper. As owner of the Ukrainian News he was used to “making decisions on the spot.”

He is also looking forward to the appointment of a permanent Ukrainian Catholic representative on the newspaper’s Board to provide it with diversity. The current Board comprises mostly Ukrainian National Federation members.

From a personal perspective, Marco is hoping that he will have the opportunity to use his experience and expertise to assist upcoming journalists with training through Lviv’s Ukrainian Catholic University.

So, 29 years after successfully taking up the challenge of keeping Canada’s Ukrainian community in the diaspora informed about itself and its country of origin as an independent operation, Marco transitions his creativity into another journalistic venture seeking a fruitful and prosperous future.