“Today, September 16, [2017] what we have been thirsting for, for eight years, occurred – the consecration in honour and glory of the Holy Trinity, the church of Kyiv’s Three Holy Hierarchs seminary of the Ukrainian Greek Catholic Church,” wrote seminarian Roman Suchoruchow.

The gift from Calgary couple, Stan and Marge Owerko, was the primary funding that enabled the seminary to realize its dream of having a church attached to it. Approximately 40 pilgrims, 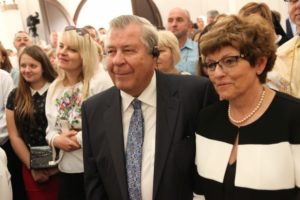 mostly from Calgary, including family members, accompanied the Owerkos, parishioners of St Stephen Parish, Calgary, to the consecration.

“We are so proud of them!” noted Bishop David Motiuk of the Ukrainian Catholic Eparchy of Edmonton, prominent participant in the consecration.

”It was an awesome experience,” said Bishop David Motiuk of the Ukrainian Catholic Eparchy of Edmonton, “in which the eparchy figured prominently. Stan and Marge Owerko, through their generous donation, not only contributed to the building of a church, the structure itself, but also a building up of the Church, the people of God.”

As seminarian Roman noted: “Participants in today’s festivities are not only the seminary of the Three Holy Hierarchs Seminary, not only individual bishops, priests and faithful, but the entire Church, of which we are all a part.”

For more information about the seminary, visit the seminary’s website at http://ktds.org.ua/news/our/osvyachyennya-syeminariynogo-khramu-pryesvyatoyi-troytsi/ or

the information brochure at http://ktds.org.ua/news/our/osvyachyennya-syeminariynogo-khramu-pryesvyatoyi-troytsi/