Most of the year he lives near Rome. He is a well-respected scholar, Fellow of the University of Toronto’s Chair of Ukrainian Studies, and the Ukrainian Catholic Eparchy of Edmonton’s and indeed the global Ukrainian Catholic Church’s, expert historian, with the Vatican’s mountain of information at his fingertips. He is Rev. Dr. Athanasius McVay. 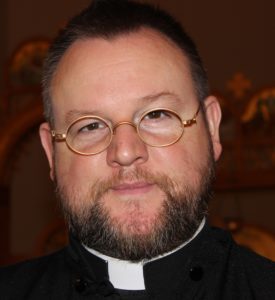 Father Athanasius is a priest and an historian, focused on researching documents relating to the “Vatican’s twentieth-century diplomacy and the Ukrainian Greek-Catholic Church in the 19th and 20th centuries.”  He has written and edited two books, the most recent being his 2014 God’s Martyr History’s Witness: Blessed Nykyta Budka, First Ukrainian Catholic Bishop of Canada, published by the Ukrainian Catholic Eparchy of Edmonton and the Metropolitan Andrey Sheptytsky Institute.

After obtaining the privilege of accessing additional Vatican documents, Father Athanasius is completing a book, based on new information he has uncovered about little-known details of the life and activities of Metropolitan Andrey Sheptytsky.

Ordained priest in 1995, in Winnipeg, fluent in four languages, with a working knowledge of four more, Father Athanasius has a doctorate in ecclesiastical history from Rome’s Pontifical Gregorian University, among much other study and certification. He has dozens of professional paper and presentation credits to his name.

Father Athanasius is originally from Winnipeg, Manitoba. His father is a native of Newcastle-upon-Tyne, England, and his mother a second-generation Ukrainian-Canadian.

In the late 1990s, he administered St. Basil’s Ukrainian Catholic Church in Edmonton. He now spends the greater part of the year immersed in the Vatican and other archives. The high religious seasons – Christmas and Easter – he spends in London, England, assisting at the Ukrainian Catholic Cathedral of the Holy Family.

Why another book about Metropolitan Andrey Sheptytsky? 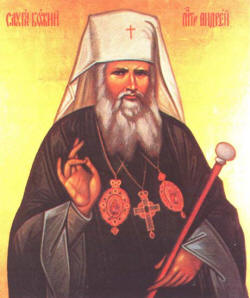 There have been scores of works devoted to bringing out specific areas of the Metropolitan’s interests, activities and achievements. English-language books include the 1989 Morality and Reality: The Life and Times of Andrei Sheptyts’kyi edited by Paul. R. Magocsi, Andrew Krawchuk’s 1997 book reflected on Christian Social Ethics in Ukraine: The Legacy of Andrei Sheptytsky, while Fr. Peter Galadza’s 2004 work entitled The Theology and Liturgical Work of Andrei Sheptytsky (1865-1944) focused on the Metropolitan’s contributions to liturgical practices.

When there are many works in existence, why is Father Athanasius, with the encouragement of Bishop David Motiuk of the Ukrainian Catholic Eparchy of Edmonton, so anxious to write a book about Metropolitan Andrey Sheptytsky?

In his research into the Apostolic See’s archives, Father Athanasius has uncovered considerable previously unavailable information about the Metropolitan and his work.

The Metropolitan was a man for all seasons and for the universal church about whom information should be shared in the universal English language with the entire world.

What information was previously accessible and sharable was conveyed in languages other than English. It is Father Athanasius’ belief that the Metropolitan was a man for all seasons and for the Universal Church, about whom information should be shared in the universal English language with the entire world.

“The Apostolic See’s historical archives are housed in different locations,” explains Father Athanasius. “The bulk of the materials are contained in the Vatican Secret Archives, while other files are located in other Vatican departments. Much work goes into consolidating these archives, making sure they are properly organized and accessible to scholars.”

In 1985, St. John Paul II permitted scholars to access materials up to the year 1922. “In 1997, on orders of Pope St. John Paul II, the Oriental Congregation specifically opened Eastern Catholic documents pertaining to martyrdom of the Eastern Churches,” Father Athanasius explains. In 2006, Pope Benedict XVI opened those from 1922 – 1939 for consultation by historians, among them Father Athanasius, one of the very few representative from the Ukrainian Catholic Church.

These archives are referred to as the Vatican Secret Archives. Unfortunately, Father Athanasius notes, “the terminology suggests a rather sinister meaning.” What the name is intended to convey is simply that these documents are private material belonging to the Apostolic See.

What has become clear in his research into the pertinent documents, Father Athanasius indicates, is that Metropolitan Andrey held a state office in the Austro-Hungarian Empire, in addition to managing his religious responsibility.

“He saw that his Ukrainian Catholic flock had a justifiable desire for self-determination. He needed to make the Ukrainian voice heard, but had to tread a fine line with the Ukrainian community. His great desire was to bring the Orthodox Church of Kyiv to union with Rome, so that the Ukrainian people could be in unity with each other politically and spiritually.”

Metropolitan Sheptytsky’s sole purpose was the “Cause of the Union,” unity, identity, Liturgy belonging to the Kyivan Church rather than a hybrid. This goal of a vselenska tserkva (universal church) became an obstacle to unity with the Orthodox.

“He was accused of playing politics,” says Father Athanasius, to bring about a united Ukrainian voice. He wanted recognition that Eastern Churches have the same dignity as the Latin Church.

“Metropolitan Sheptytsky believed that we don’t need to add or borrow anything. We have a strong identity in ourselves, the Church of Kyiv.”

The Russian State was not happy with Sheptytsky’s focus and leadership, either. “They saw him as an obstacle to the absorption of the Ukrainian Church into the Russian Orthodox, so they imprisoned him, making him the only bishop to be imprisoned during the First World War.”

When Poland dominated the scene, many Ukrainians were forced to convert to the Roman Rite.

The old Polish-Lithuanian Commonwealth looked at things from the social order/class perspective rather than based on ethnic lines. Because of the Sheptytsky family’s standing, the Polish saw the Metropolitan as part of their elite and expected him to take his people’s (the Polish) side rather than that of his Ukrainian flock’s. Because he was intent on strengthening the Ukrainian Catholic community’s position, he was seen by the Polish as a traitor because he supported an independent Ukrainian state.

According to the research Father Athanasius has been able to complete, Metropolitan Andrey “was a diplomat who tried everything to bring about his goal.”  He was misunderstood at times and criticized for his letters to the likes of Tsar Nicholas II, Stalin and Hitler in an effort to protect the Ukrainian position. His pleas to the Vatican often went unanswered.

His goal was unity of the Church and fidelity to Christ. 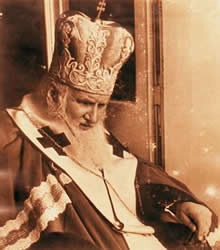 The Metropolitan Andrey Sheptytsky story will be an ongoing, evergreen project as more and more documents become available and more information is unearthed, Father Athanasius believes. Currently, most of the Vatican files from 1939-1944, covering life under the Soviet and Nazi regimes are still closed. Nevertheless, he was granted a special privilege of accessing those at the Congregation for the Eastern Churches, because of the exception made by St. John-Paul II in 1997.

“We are today what we are because of the Metropolitan’s vision for who we are,” says Father Athanasius. “We all come from the spiritual tradition of Kyiv.”

The progress made by Metropolitan Andrey has been continued by his successors. Ukrainian Greek Catholic Church Patriarch “Sviatoslav is trying to build on the Sheptytsky vision of a whole Church across the world.  As well, the social progress we made in the diaspora helped Ukrainians in the homeland to grow stronger and more able to define themselves as a nation.”

The new information will be of interest to people of many backgrounds not just to scholars and clergy. Stories such as those that illustrated Metropolitan Sheptytsky’s humanitarianism, not only for his own flock, but for others will provide a valuable insight into the leadership of the Ukrainian Greek Catholic Church in the 1930s and 1940s.

“He saved the family of Ezekiel Lewin, the Head Rabbi of Lviv,” says Father Athanasius.  “His son, Kurt Lewin, spent a lifetime glorifying Sheptytsky’s name.”“The Anti-Defamation League’s Abe Foxman is an ally of the cause. The mounting chorus of voices calling for Yad Vashem’s reappraisal of the Sheptytsky legacy also includes its former Director Avner Shalev, who recently declared that Yad Vashem needs to rethink its position.”

Sheptytsky is described by Davidzon as “a humane figure of deep learning, broad sensibility, and ecumenical tolerance, [who] had personally arranged for the hiding of 150 Jews—mostly children as well as about a dozen rabbis—in the metropolitan’s official residence and among his monasteries. Not one person sheltered by the church was turned over to the Gestapo.”

“Before the end of 1945, Pius XII had immortalized the late Metropolitan within an act of the papal magisterium, the encyclical letter, Orientales omnes ecclesias,” writes Father Athanasius in his upcoming book. “The letter praises Sheptytsky [for] his long episcopacy and achievements, singling out the Theological Academy and other institutions of learning and culture. The second paragraph speaks of Kyr Andrey in the context of the persecution of the Greek-Catholic Church.

“Pius XII’s message was summarized in John-Paul II’s Apostolic Letter on the 400th anniversary of the Union of Brest in 1996. Finally, Pope Saint John Paul II mentioned him in his allocution on the Beatification of Ukrainian Martyrs in Lviv in 2001.”

Father Athanasius hopes that his book will bring to light the information that has now become available about the religious hot topics that challenged Metropolitan Sheptytsky and expand the needed historical background about this remarkable man in the turbulent times of the 1930s and 1940s. Metropolitan Sheptytsky died in 1944.

Publication of the book is slated for 2018.

Well worth listening to

is the Canadian-based Ukrainian Jewish Encounter video posted at https://ukrainianjewishencounter.org/en/saved-by-sheptytsky/ with very touching testimony from several of those whom Metropolitan Sheptytsky saved from annihilation by the Nazis.

His cause with the Yad Vasham organization’s recognition as Righteous of the Nations is being promoted by such key individuals from the Jewish community as the current chief-Rabbi of Ukraine, Rabbi Dov Bleich, “former Polish Foreign Minister Adam Daniel Rotfeld, Nobel prize-winning chemist Roald Hoffmann, David Kahane, the former chief rabbi of the Israeli Air Force, and the pediatric cardiologist [Dr.] Leon Chameides,” according to Vladislav Davidzon in a Tablet Magazine article.