“We can’t wait for next year!” Seventeen years of New Kiew’s children’s camps get better every year

On the first day, Tuesday, July 11, the camp, its children, parents and volunteers were blessed with a Divine Liturgy concelebrated by Bishop David Motiuk and Fr. Jim Nakonechny. A potluck lunch served by the New Kiew branch of the Ukrainian Catholic Women’s League of Canada (UCWLC) ensured the campers would be well-reinforced to begin the serious business of camping. Bishop David supplemented all attendees’ nutrition with ice cream. 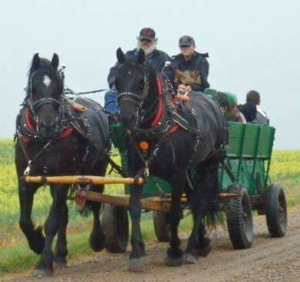 “The clouds were threatening, but everyone thoroughly enjoyed the wagon rides provided by Hitchmasters,” said Kathryn Cimbaliuk, New Kiew’s UCWLC president, “breaking into song during the rather damp rides.”

The children, aged two to 13, from Two Hills, Vegreville and Edmonton painted pottery provided by Artables’ Debra Durrur. They learned to sing the Ukrainian National Anthem and the Ukrainian translation of This Land is Your Land through the tutelage of Joyce Chrunik-Rudiak and the camp assistants. 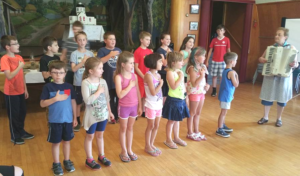 From Father Jim, the young campers learned about the challenges their grandparents and great grandparents met on their arrival in Canada, what “treasures” they brought with them and what they cherished, especially their faith. The importance of their faith was further discussed by Eparchial religious education director, Bernadette Mandrusiak and Eparchial youth ministry director, Millie Schietzsch who also informed the children about the first priests to arrive in the province and their role in maintaining the faith amongst the Ukrainian settlers. 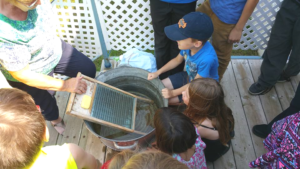 The housing, lifestyle and comforts like quilts and blankets the pioneers created for themselves was a lesson Edith Zabadiuk shared. With Ed Cymbaliuk, she helped the children to visualize the school experience of their ancestors, while Audrey Ginda shared information about the immigration and prairie homesteader experiences.

The children observed the separation of cream from milk, how cabbage was shredded for sauerkraut, peas shelled, clothes scrubbed on a washboard and dried without the use of a dryer. “The men of New Kiew demonstrated cutting grain with a scythe and a sickle,” Kathryn explained, “threshing the grain with a flail and pounding the grain with a stupa to make kutia [Christmas Eve wheat].”

For hands-on experience, the children were given a lesson by UCWLC volunteers in preparing a dish that was dear to the pioneers and continues to be dear to their descendants’ stomachs – pyrohy!  The treats they made, the “young pioneers” took home with them. 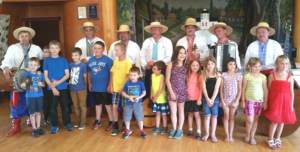 Darmohrai (Дармограй) (YouTube link), a male folk music group visiting from Vinnitsia, Ukraine, provided an interactive conclusion to the camp on Friday evening, July 14. The singer-musicians play a variety of instruments, including kobza, lyre, bagpipes, sopilka, violin, tilinka, bukhalo, kozobas and the surma. The children experienced the sounds of each instrument and were treated to “an outstanding concert” just before they themselves entertained with the Ukrainian and English songs they learned in camp. 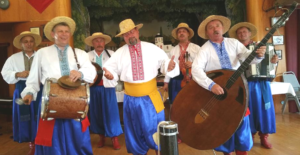 The camp concluded with a pyrohy supper, a campfire and time to socialize.

The New Kiev children’s camp was supported financially or in kind by the New Kiew branch of the UCWLC and the parish, a Ukrainian Catholic Eparchy of Edmonton youth grant, the Knights of Columbus, and numerous volunteers and parents.

“It takes a community to raise a child,” Kathryn said, “and we certainly have a great one!”

A lot of exciting experiences were crowded into four, what must have seemed like short days to the children. Their enthusiastic enjoyment of the program was expressed by some of the children who said: “We can’t wait for next year”, while a parent noted that: “Our son wants to continue attending and then be a youth helper at camp.”