On June 7, 2017, approximately 200 guests gathered at Verkhovina Hall to “celebrate God’s Goodness.” Highlighted at the 8th Annual Bishop’s Prayer Breakfast were several momentous anniversaries that elaborated on that theme: 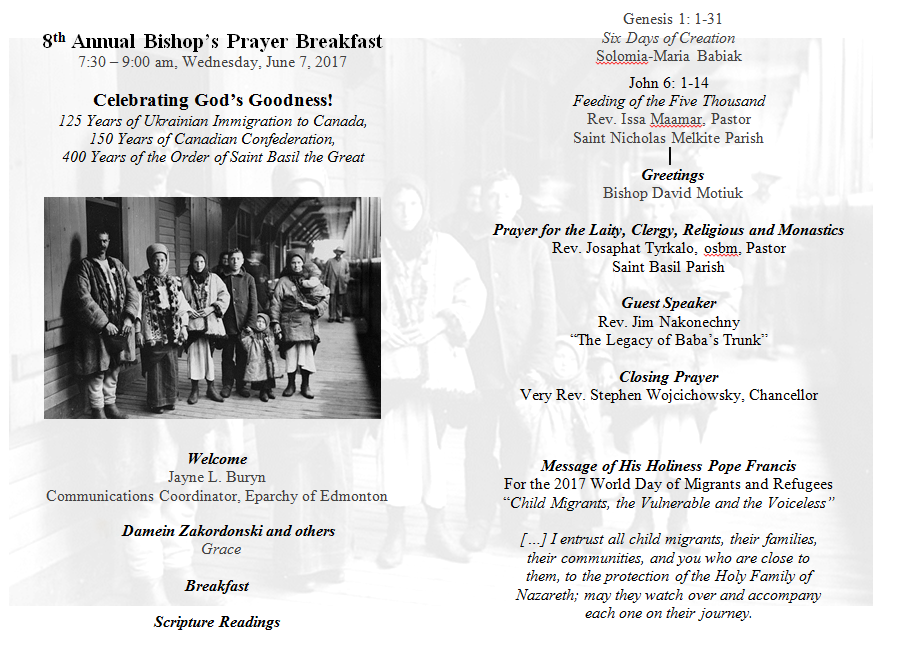 This year we also commemorate the 125th anniversary of the founding of the Sister Servants of Mary Immaculate (SSMI) in Western Ukraine, through the actions and guidance of Josaphata Hordashevska, who later became its first member and the leading light of the Order, and Father Jeremiah Lomnitskyj, OSBM.

Tying in with the immigrant experience, breakfast keynote speaker, Rev. Jim Nakonechny, described the treasures Ukrainian immigrants brought with them to Canada in their trunks (куферi, kuffers) and challenged those in attendance to pass the legacy on using today’s tools.

125 Years of Ukrainian Immigration to Canada: 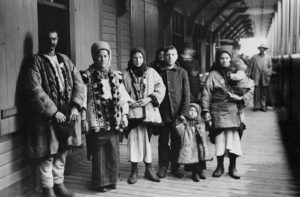 According to Canada Alive, Canada’s second prime minister from 1891-1892, John Abbott, reacting to a takeover threat from the United States, was determined to settle the west through immigration.

As a result of the campaign that rigorously promoted Canada as a potential new home with the freedoms and benefits not seen by them in their homeland, many Ukrainians escaped personal, religious and financial slavery to come to Canada. “They came with all of their dreams and aspirations for a better life in Canada,” noted Father Jim Naknechny, “for themselves and for all of us of Ukrainian descent.”

In July of 2013, the Canada Alive website, noted that “Ukrainian-Canadians have had one of the biggest impacts on the development of Canada of all the ethnic groups that have immigrated to this multi-cultural land.” The Canada Alive websites added that: “Along with French, British and Scottish settlers, Ukrainian immigrants make up one of the largest groups to come to Canada. They settled the West and wove their culture deeply into the fabric of Canadian society.” 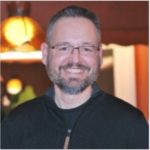 Ukrainian immigrants brought with them very few possessions to their new “home and native land”.  A crucial item they did transport across the ocean with them, however, was a trunk (куфер) containing the most treasured personal and religious items, and as Fr. Jim noted: “Their legacy has been handed down to us to continue, but now we too must add to that legacy for the generations that will follow us.

“What have you passed on to your children, grandchildren and community?” he asked.  “What will your legacy be?”  Fr. Jim challenged breakfast attendees.

At a recent event, Alberta’s Minister of Economic Development and Trade, Deron Bilous, a Canadian of Ukrainian background himself, noted that: “Today, more than 345,000 Albertans are of Ukrainian descent and our province continues to welcome newcomers from Ukraine ….”(Ukrainian Weekly). What a phenomenal legacy we can create working together with the generations that have made Canada their home and with our newly-arrived brothers and sisters.

This year – 2017 – is special for Canadians of all backgrounds. It is the 150th anniversary of Canada’s Confederation. We have much to be thankful for in the freedom and plenty that the majority of us enjoy today in this “glorious and free” country of ours.

On July 1, 2017 Canada celebrated a milestone: the 150th anniversary of the coming into force of the British North America Act (now the Constitution Act, 1867).

Some 16,000 years ago, a glacial melt allowed people to move by land south and east across the Bering land bridge, and into Canada. We are grateful to the aboriginal peoples – First Nations, Inuit and Métis – for laying the foundation for what eventually became this great country of Canada.

Relatively recently by comparison, in 1867, Upper and Lower Canada were joined in Confederation with two other British colonies, New Brunswick and Nova Scotia, forming a self-governing entity named Canada. The new dominion expanded by incorporating other parts of British North America, including Newfoundland and Labrador in 1949.

“Canada’s 150th anniversary of Confederation is an occasion for us to think about what we have achieved as a relatively young country and to promote a strong sense of pride and belonging for all Canadians,” Bishop David Motiuk said in his breakfast commentary.

400 Years of the Order of Saint Basil the Great

Four hundred years ago, the Order of St. Basil the Great of Saint Josaphat was established. Their history ties in well with the 150th anniversary of Canadian nationhood and the 125th anniversary of Ukrainian immigration to Canada.

The Basilian Fathers were the first clergy to serve the Ukrainian Catholic pioneers who settled in this region of Canada. They dedicated their lives to ensuring the bond between God and His people stayed strong for generations. 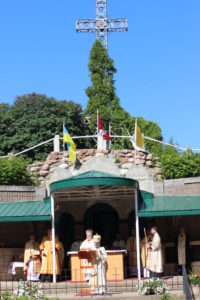 Today, members of the Basilian Order serve Sts. Peter and Paul parish in Mundare, and several other parishes in the area. St. Basil’s Ukrainian Catholic Church in Edmonton was established and is served by the Basilian Fathers. In Mundare, the Basilians constructed and maintain a Museum dedicated to the Order and its works.

The Order extended an invitation to all parishioners in the Edmonton Ukrainian Catholic eparchy to celebrate the milestone with the Most Rev. Metropolitan Lawrence Huculak, the Order’s provincial superior, Very Rev. Gabriel Haber, OSBM, and Eparchial eparch, Most Rev. Bishop David at a Thanksgiving Divine Liturgy on June 25th. The service was held at the Mundare Grotto. (For details about this event, see the online article, “Mundare Praznyk and Pilgrimage marks several key anniversaries

Tributes to Basilians, SSMI and Canada 150.”)

Very appropriate to the celebration of the triple anniversaries were this year’s prayer breakfast special guests: Solomia-Maria Babiak, and Rev. Issa and Mrs. Rima Maamar. 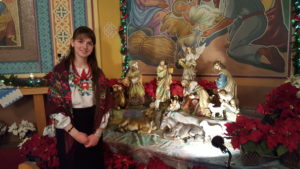 Solomia-Maria is originally from Lviv, Ukraine where she studied at a medical college and the Ukrainian Catholic University. While in Ukraine, she cantered at Sts. Peter and Paul Ukrainian Catholic Church in Lviv and conducted the parish’s children’s choir.

This spring she completed her second-last year of study at Newman Theological College in Edmonton and currently cantors and conducts the children’s choir “Ангелики” (Angels) at St. Josaphat Cathedral.

Solomia-Maria read from Genesis 1: 1-31, the Six Days of Creation.

Rev. Issa Maamar is the recently-appointed pastor of Saint Nicholas Melkite Greek Catholic parish in Edmonton, which holds its services in the Dormition of the Most Holy Mother of God Ukrainian Catholic church in Edmonton. Members of the parish include families of Lebanese, Syrian and other Middle Eastern backgrounds. Services are held in Arabic and English.

Father Issa (“Jesus” in English) and his family are recent immigrants to Canada from war-torn Syria.

The success of this year’s event has inspired planning for the 9th annual Bishop’s Prayer Breakfast in 2018 to begin.