If you have ever met Father Julian you will know that he has two especially outstanding and endearing characteristics – his infectious, warm and joyful smile and … he doesn’t stop moving for long. His vitality may be what enables him to become involved in numerous roles, in both the religious and educational communities of Edmonton.

priest.” There is only one such designated priest in the Edmonton area. Because of his position in the military which is home to numerous religious affiliations, Fr. Terry Cherwick, Edmonton Garrison Chaplain, has the bi-ritual rites authorization to totally serve all Catholics.

Edmonton Catholic Schools has 90 schools within its jurisdiction. Father Julian’s role as ECS District Chaplain involves visiting schools, celebrating Liturgies of the Word, making presentations to staff and, mostly, to the students from kindergarten to high school. He works out of an office in St. Matthew’s Elementary School, where a Ukrainian bilingual program is offered.  He is also responsible for chaplaincy duties at the exclusively Ukrainian St. Martin’s Elementary School on Thursdays.

“It’s so very important that children see the priests in school,” Father Julian says. “That relationship between parish, school and home is not replaceable.”

He has had some interesting experiences when the priests of both traditions gather together for a school event, such as for the sacrament of reconciliation during Lent. The Roman Catholic priests wear vestments in one combination of colours while Father Julian dons the Eastern version. Students ask him why he’s dressed differently. This gives him an opportunity to talk to the children about the Ukrainian Catholic Church.

In a recent Ukrainian Catholic reconciliation session offered at one of the high schools he was approached by two Grade 10 Baptist students.  These young people requested to be included in the reconciliation process, although it is not considered a sacrament by Baptist Christians. Father Julian could not give them absolution, but he guided them through the process and gave them a blessing.

He left these young seekers with words of encouragement: “You have something there. You are acknowledging God.” 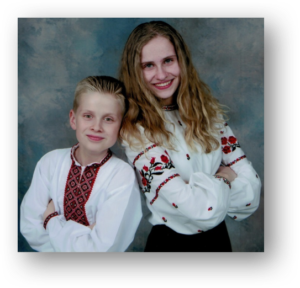 In addition to his pastoral duties at St. Nicholas, and ECS District co-Chaplaincy, the 41-year-old priest is the Vocations Director for the Ukrainian Catholic Eparchy of Edmonton. Father Julian is also married and the father of two teenagers.

It is no wonder that he is in perpetual motion.

War in the Balkans, but God had other plans

Both Julian and his older brother Stanislav attended schools, from kindergarten to grade eight, in what was then Yugoslavia. In 1989, Father Julian’s parish pastor recommended that he finish his high school studies at the Ukrainian Pontifical Minor Seminary of St. Josaphat, operated by the Ukrainian Catholic Salesian Fathers in Rome. Following their pastor’s advice, both Julian and Stanislav moved to Rome to complete their grade nine to high school studies.

In 1991, the factional Balkan conflict broke out in Yugoslavia, where the Bilyj family were born, raised and lived. Two years later, Father Julian’s family decided to immigrate to Canada. One year younger than his brother, Fr. Stanislav Bjeli, who is also a priest in the Edmonton Eparchy today, and one year older than sister, Iryna, Father Julian, 17 at the time, and family on his father’s side began the journey.

Had they stayed in their native land, Julian and Stanislav might have found themselves soldiers in the Yugoslavian army. Because of the war, men as young as 17 were being conscripted.

But the good Lord had other plans for the brothers.

The teenage Julian and Stanislav flew to Toronto from Rome. Their parents were to arrive in Toronto on the same day, travelling via Vienna, and meet them at Pearson airport.

On the brothers’ arrival, the young Julian found himself barred from entering Canada.  The cause of his ineligibility: his age.  He was not quite 18 years old and needed parental sanction to enter Canada. His parents, however, were not on record with Canadian immigration authorities as having ever arrived in Canada. (They had been delayed in Vienna on their way to Toronto.)

Father Julian said that he became anxious, feeling stuck in No Man’s Land, not knowing what would become of him and his brother.  The pair had 50 dollars between them, but needed money for a hotel room and for food while they awaited their parents’ arrival. Father Julian confesses with a smile that, had he known the airline was covering the cost of their overnight stay, he would have been spared the worries.

On this occasion, however, Father Julian’s brother began to worry him, too. He was indulging himself in restaurant food with the hardy appetite of a 19-year-old, without considering the cost.

Fortunately, the following day the teenagers were reunited with their family. The cost of food and lodging was taken care of. Julian was allowed to enter the country where Stanislav could continue to assuage his hunger.

One of the many pleasant memories Father Julian has of his experiences in Canada occurred during the 1993 Christmas season. Dobrodijka Luba Kowalchyk, who was with Ukrainian Canadian Social Services, was contacted by the Red Deer Ukrainian Catholic parish of St. Vladimir with an offer to assist a newcomer immigrant family in Edmonton. The Bilyj family was chosen to receive a Christmas food basket, tree, and other items, making this Christmas extra special for them.

Father Julian attended Alberta College (now Norquest) for a year, learning English. In 1994, the Most Reverend Bishop Myron Daciuk, late eparch of the Ukrainian Catholic Eparchy of Edmonton, on the advice of Fr. Michael Kowalchyk, pastor of St. Vladimir’s parish at the time, enabled the young Julian to begin philosophy and theology studies for the priesthood at Ottawa’s Dominican University College and Sheptytsky Institute of Eastern Christian Studies.

When Julian returned to Edmonton in 1999, current Most Reverend Metropolitan Lawrence Huculak, of the Archeparchy of Winnipeg  was Bishop of the Edmonton Eparchy. He posted Julian to serve a one-year practicum at St. Josaphat’s Ukrainian Catholic Cathedral. There Julian found one more outstanding reason to love Canada: the Cathedral is where he met Slavica, his future life partner.

Along with her family, Slavica had been living in Yugoslavia when the war broke out. In 1993, at the age of 18, she was forced to go to Ukraine to continue her studies after high school. She earned an Education degree in Ternopil, then in 1997, immigrated to Canada to her uncle’s family home. Her mother, father and sister came to Canada several years later. 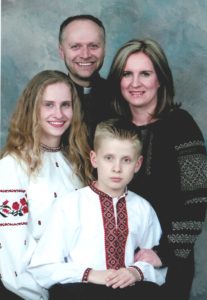 After his practicum, Julian took a year off to consider his next steps. During this time he worked with an organization helping troubled young people. In 2001, he and Slavica were married. They now have two children – Matthew, age 12 and Julia, age 15.

Father Julian obtained his Bachelor of Education degree at the University of Alberta in 2004. In Red Deer, he taught grades four and five at Red Deer Catholic Schools. In turn, Slavica began a new career as a newcomers’ settlement and education counsellor. In 2013, Father Julian and his family came to St. Nicholas Ukrainian Catholic Parish in Edmonton.

God has truly blessed the Ukrainian Catholic Eparchy of Edmonton.

And may He bless this talented and energetic young priest with many years of contributions towards building the Ukrainian Catholic Church in Canada and around the world.