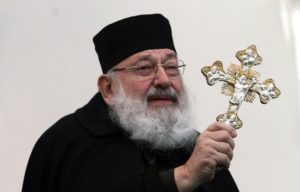 On Monday, June 5, 2017, the Ukrainian Greek Catholic Church (UGCC, in Canada known as the Ukrainian Catholic Church) buried a “spiritual giant of our church” in the crypt of the Patriarchal Cathedral of the Resurrection of Christ.  Blind and seriously ill, His Beatitude Lubomyr Cardinal Husar (Любомир Гузар), a cardinal of the Catholic Church, and head of the UGCC, the second largest independent Church in communion with Rome, passed away on May 31, 2017.

“He was the right man at the right time in our Church,” notes Bishop David Motiuk of the Ukrainian Catholic Eparchy of Edmonton, “He was right up there with Metropolitan Sheptytsky, a leader of the Prince Volodymyr tradition.” As a proponent of the Church established by Prince Volodymyr of Kievan Rus’, His Beatitude “wanted our Church to rediscover our mission and our ministry. He believed it was proper to have our Apostolic Church in Kiev.”

During his missionary work in the land now known as Ukraine, St. Andrew is believed to have said: “a great nation in His (God’s) eyes will be born here.” Cardinal Husar was very happy that the “Episcopal See moved from Lviv back to Kiev to fulfill the prophesy of St. Andrew.”

Bishop David noted that His Beatitude Lubomyr Cardinal Husar wished to unite our church within and outside Ukraine. “He had a universal vision, his perspective on the Church Universal was quite broad,” Bishop David explained. “He was able to express a global vision for the Church. A patriarch who had lived in a particular area only, without a wide exposure to other communities, would have had a limited perspective.”

Cardinal Husar fulfilled his ecumenical role by establishing positive relationships with three Orthodox churches in Ukraine. Despite being particularly a religious leader, he was “the moral authority for all of Ukraine, not just the Church, but for politicians and others at a time when there were many voices pulling in many directions. For the Church this was a huge role.”

Bishop David remembers Patriarch Husar as a “deeply spiritual man”, who saw through a different lens from the rest of us: through spiritual eyes rather than human eyes.” The Bishop shares a story that brought this realization to him.

Quite a few years ago I had this dream about Cardinal Husar, which I later shared with him. At that stage [the time of the dream] he was blind as a result of macular degeneration, could see only shadows.

In the dream, he and I are in a car. He’s driving. I’m sitting in the rear seat.

I’m petrified because he’s driving blind. He’s laughing and smiling. We’re approaching a huge hill. All I can see ahead of me is water. We topped the hill, he veered the car to the left and avoided the water.

I interpreted the dream to mean that “he saw with spiritual eyes. I’m still seeing the world around me with human eyes.” He was experiencing a loss of physical sight on the worldly, but was clearly seeing the spiritual world. When I shared the story with him, he laughed again, as he had in my dream.

Bishop David enjoyed a personal connection to Cardinal Husar: “He ordained me to the episcopate, as a Bishop 15 years ago,” Bishop David explains.

Lubomyr Cardinal Husar was born in Lviv, Ukraine on February 26, 1933. When he was 11 years old, the Russian invasion of Ukraine during World War II forced his family to flee their native land, first to Salzburg, Austria, then the United States.

In the early 1950s, he studied at St. Basil‘s Ukrainian Catholic College Seminary in Stamford, Connecticut, and later the Catholic University of America in Washington, DC, and Fordham University in New York. He was ordained a priest for the Ukrainian Greek Catholic Eparchy of Stamford on March 30, 1958.

His ordination was followed by eleven years of teaching at St. Basil’s College Seminary, where he had once studied, and serving as pastor at Holy Trinity Ukrainian Catholic Church in Kerhonkson, New York for three of those years.

This service to God, the Church and his people was followed by three years of studies in Rome at Urbaniana Pontifical University where he earned a doctorate in dogmatic theology. On completing his studies, then-Father Lubomyr entered the Studite Monastery in Grottaferrata, Italy (near Castelgondolfo, location of the Papal summer home) and was subsequently appointed its Superior (heguman) in 1974.

In 1977, Josyf Cardinal Slipyj consecrated Father Lubomyr a bishop and the following year he was named archimandrite (archabbot) of the Studite Monks in Europe and North America. When the Soviet Union broke up in 1991, he returned to Ukraine and served as spiritual director at the renewed Holy Spirit Seminary in Lviv.

Three years later, he established a new Studite monastery in Ternopil, Ukraine. In 1995, the Synod of Bishops of the Ukrainian Catholic Church elected him exarch of the Archiepiscopal Exarchy of Kiev-Vyshhorod. In another year, he was appointed auxiliary bishop “with special administrative authority to his Beatitude Myroslav Ivan Cardinal Lubachivsky, Major Archbishop of Lviv,” according to the Religious Information Service of Ukraine (RISU).

The following year, the Ukrainian Greek Catholic Synod elected Bishop Husar as Major Archbishop of the UGCC (today referred to as “Patriarch” by Canada’s Ukrainian Catholic community). He served the Church in this role for more than 10 years.

The title of “cardinal” was bestowed on Patriarch Husar the following month by Pope St. John Paul II.  The same year, 2001, Cardinal Husar and the clergy and faithful of the UGCC welcomed the Pontiff to Ukraine, for his first visit to a former Soviet Union republic.

Uncommon for a Uniate, Cardinal Husar was one of the cardinals considered eligible for the papacy at the 2005 papal conclave to succeed John Paul II. At this conclave, he participated as a cardinal elector.

RISU noted that “His Beatitude also became the first Chancellor of the newly-established Ukrainian Greek Catholic University in Lviv, Ukraine.”

On August 21, 2005, the Major Archiepiscopal See of Lviv was moved to the capital city of Ukraine, Kiev. Cardinal Husar became the Ukrainian Greek Catholic Major Archbishop (Patriarch) of Kiev and Halych.

In 2011, His Beatitude Lubomyr Cardinal Husar resigned as father and head of the Ukrainian Greek Catholic Church and Major Archbishop of Kyiv-Halych, although he maintained an active ecclesial and social role. Just months before his passing, he was given the privilege of celebrating his 40th anniversary of episcopal ordination at the Patriarchal Cathedral of the Resurrection with a solemn Divine Liturgy.