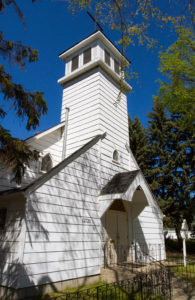 Location: 12726 – 119 Street, Edmonton. The church and an old hall were purchased in 1950 from the Roman Catholic Parish of St. Edmund. The church is also known as the Calder church. Calder, like Beverly, was a town, which in the middle of the 1950s’ became part of the City of Edmonton. In 1964, a beautiful new church hall was built to accommodate weddings and different celebrations. In 1965-1966 a new church residence was built 2 blocks from the church for $3,000.00. Originally there were 50 families. The outside architecture of the Roman Catholic Church was preserved, however the interior was adapted to reflect the Ukrainian Catholic tradition with an iconostasis. The Sunday services are celebrated in Ukrainian, with the homily and specific parts in English. The Parish served the Canadian Rail workers in the early days; today the Parish enjoys the presence of many parishioners with many different professions.

The cantors in the parish at the present time are: Bohdan Chipchura and Julian Nahnybida.

From 1975 the parish performed the centuries old Ukrainian Vertep (Christmas Pageant), visiting the Eparch, the hospitals, seniors homes, parishes in and outside the city, sometimes even 200 km. away. The children taking part in this folkloristic Ukrainian Vertep presentation are preserving our unique traditions.

The founder of the Parish was the newly ordained priest Fr. Demetrius Greschuk (1950), that later became the second Eparch (Bishop) of the Ukrainian Catholic Eparchy of Edmonton.