Dormition of the Most Holy Mother of God, Edmonton, Alberta

History of the Parish

Location: 15608 – 104 Avenue, Edmonton. The parish was organized as a mission and land was purchased in 1950 for $2,000.00. The first church, a former United Church, was acquired in 1957; the second church was built in 1972 and blessed by Bishop Neil Savaryn on October 22, 1972. The sanctuary icons were painted by Borys Makarenko in 1981 and the original iconostasis was done by Mykola Pelech with the icons painted by Volodymyr Savchak. For many years the church hall, attached to the church building, housed a day care center, which contributed to the mortgage payments. The Parish always enjoyed a strong representation of Ukrainian Catholic Women’s League (UCWLC), Ukrainian Catholic Brotherhood (BUCC) and Ukrainian Catholic Youth (UCYC). Cantors were: Harry Sirman, M. Chomiak, Zonnia Ostopowich, Brian Cherwick. A new iconostasis was built in 2002. The parish commissioned Fr. Damian Higgins from the Eparchy of Chicago to paint the icons. 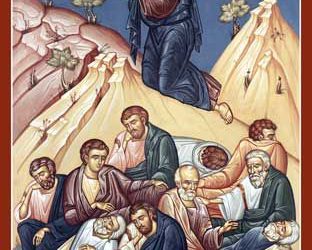 In the Gospel of Luke (Lk 11:1-2) one of the disciples said to Jesus “Teach us to pray. ” They had seen Jesus pray often and understood the importance of frequent prayer. We know that prayer must be at the heart of our own journey towards an ever closer relationship...

AGE: Age 16 and over DESCRIPTION: Instructor: Fr. Bohdan Nahachewsky All levels are welcome.  This is a wonderful spiritual opportunity! Over two weekends participants will complete a Byzantine icon in this intensive, prayerful workshop. DATES & TIMES: May 4,5,–...